It is hard to believe we have been in South Carolina almost a year now.  We stayed in Yorktown for the 4th of July festivities, then packed and left after that.  Since this coming weekend is 4th of July---let's go back and see the changes over this year.

In the backyard, I have planted tons and tons of plant material.  We added the flagstones along the pathways and recently bought a bench.  We have had some big storms here in the last few weeks and had some washout in the garden and pathway.  Slowly but surely I will get that squared away. 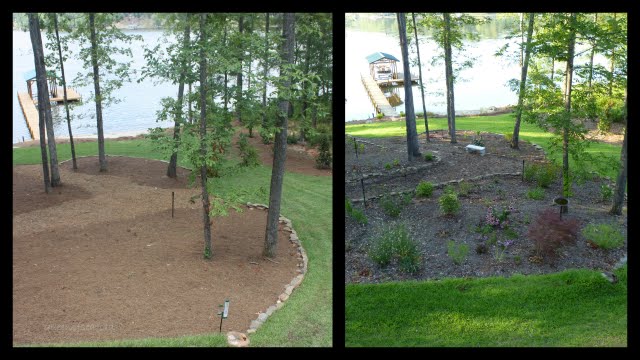 You can see the Japanese Maple in front of the birdbath.  This garden area is the sunniest.  Am trying to add more flowering plants in this area.

This area is the shady part of the garden.  There are ferns, azaleas, hydrangeas, and other shade lovers in this area. 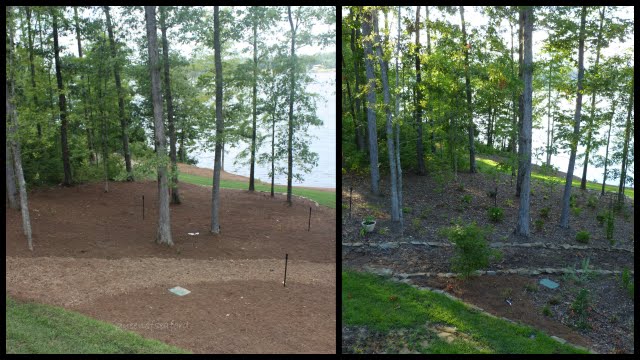 In the corner of the garden where the path begins we planted a Japanese Maple for our wedding anniversary.  It is Acer palmatum 'Glowing Embers'.

Soon after we moved in last summer there was a big storm and a lot of washout in the front by the driveway.  Charlie and I did some planting and mulching and turned a construction looking area to a nice front garden. 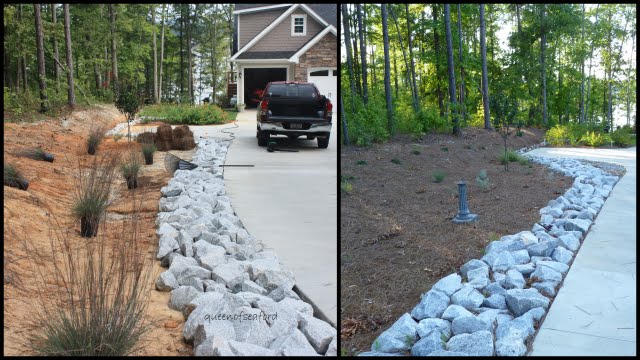 A few of the grasses didn't come back, so I added some Powis Castle Artemisia in front the Crape Myrtle. 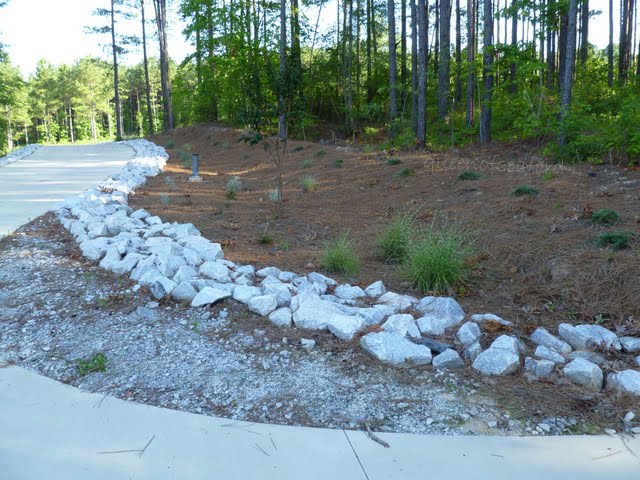 Have more weeds to take care of...but that is an ongoing process.   I like the Miscanthus 'Little Zebra'.

The side garden has filled in quite nicely.  I have been adding plants along the woodline as well. 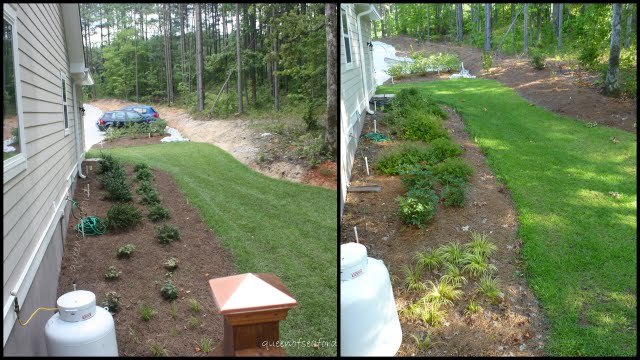 Next, a couple views from the lakeside looking back toward the house. 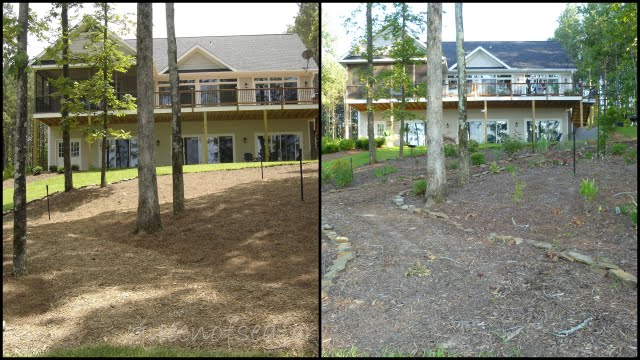 In addition to the storm water moving mulch, we have had a lot of branch tips falling out of the trees.  The female cicadas cut the branch tips to lay their eggs.  These tips die and hang from the trees until winds knock them down.  After each storm it looks like a war zone.  So in addition to the weeds, I have lots of tree litter to pick up.

The patio bank is still being added to.  Recently I planted some Nepeta racemosa 'Walkers Low' and more roses. 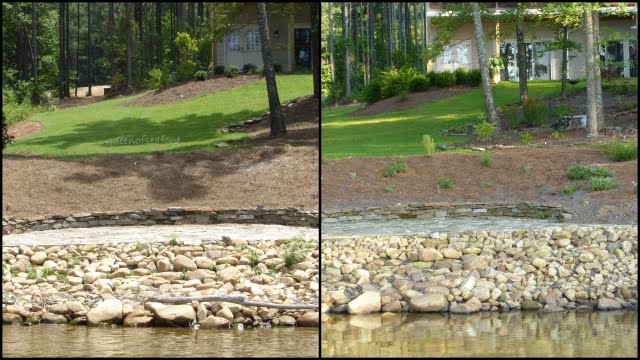 Looking forward to having this fill in.

The front garden on the left of the walkway is filling in.  Last summer I had some Ruby Grasses, not perennial in my area.  This summer I am just letting the Acorus to fill in more. 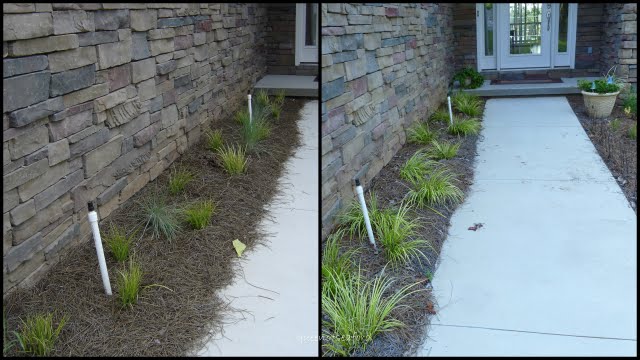 Looking from the front door to the woods in the front, the garden on the left has had its problems.  Last summer part of it was planted with Pennisetum 'Little Bunny' and it didn't come back.   First I tried some Blue Fescue grasses, but they didn't seem to thrive. 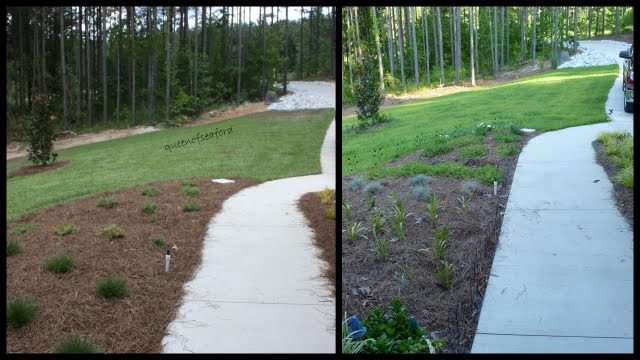 So, yesterday and today I planted a bunch of Liriope muscari 'Variegata'....ordered 50 barerooted plants.  I had more than enough for here and other places in the yard.  I clustered the Blue Fescues together and planted the Liriope behind them.

This picture was the Little Bunny from last year and then tonight, Liriope and Blue Fescue.  Along the house are a line of Gardenias with a focal plant of a Nandina 'Blush Pink' at the door. 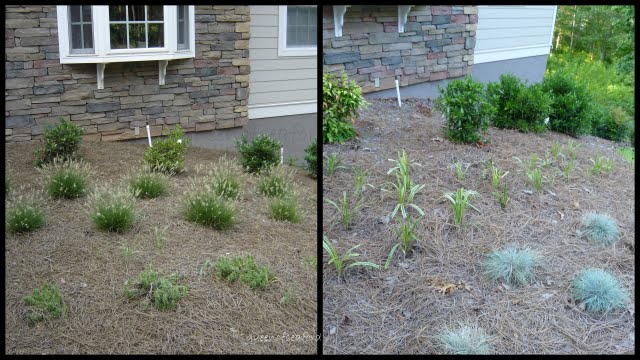 This was the Blue Fescue.......which would have looked nice with the stacked stone...oh well. 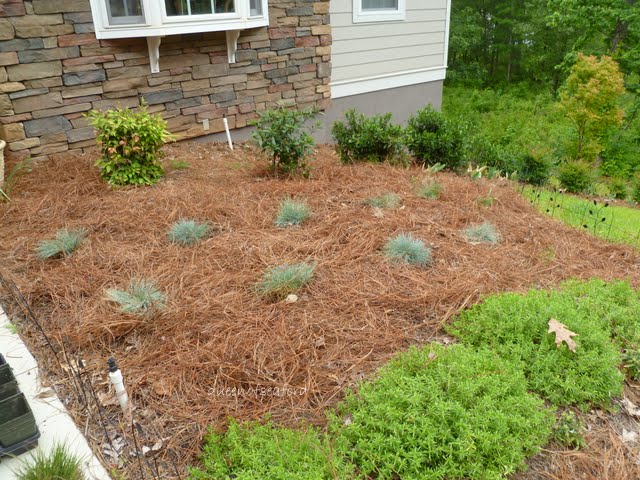 The little black fencing is around most of the foundation gardens to keep my four legged friends out of the gardens. 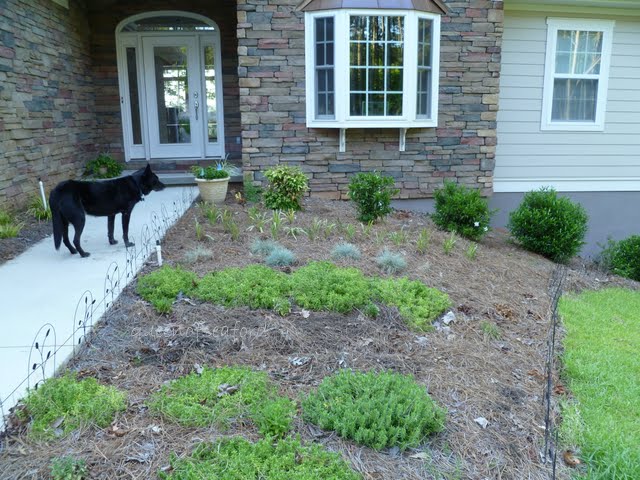 In the front area is creeping Phlox which was grand in the spring.  I added some white verbena to try to have some color.

In addition to planting all the bare-rooted Liriope I planted another Rhus typhina 'Balitiger' or Tiger Eyes.  I had one earlier this year, almost in this spot...but I thought it needed more sun and moved it.  That was the end of that Tiger Eyes.  Keep your fingers crossed for this beauty. 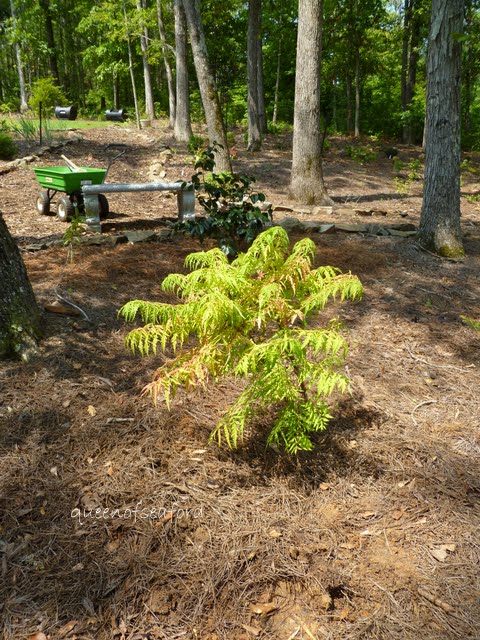 And finally, my containers for in the front of the garage....I was going for the purple and yellow combo.   I have a Sun Coleus for the tall feature, a Sweet Potato Vine for my trailing, and in the middle~~ an ornamental pepper and two different petunias, 'Pinstripe' and 'Phantom'.   I added some Liriope (from old container arrangements) and a small boxwood 'Sunburst'.  As usual the Sweet Potato vine is going gangbusters...I may pull it out and put something a little less robust.   I do like the Ornamental Peppers and Petunias. 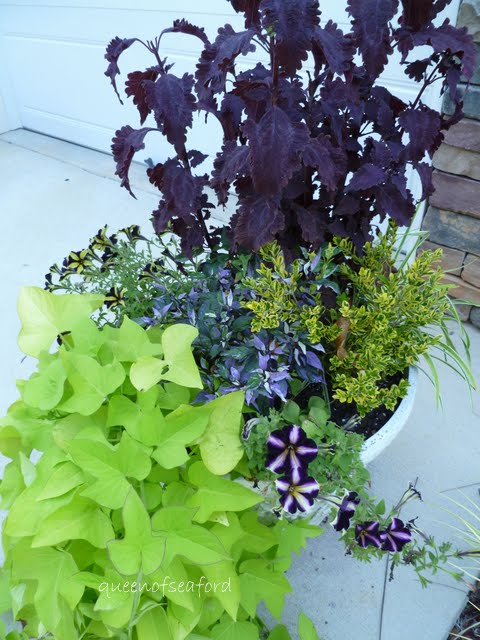 Thanks for coming along with me on my first year tour of the gardens.

©Copyright 2011 Janet. All rights reserved. Content created by Janet for The Queen of Seaford.