How Do You Know?

You plant and you plant. Some are shrubs, some are trees, some are perennials, and some are bulbs.... one would think shrubs and trees are visible in the garden. HA! In my garden  I have a lot of baby plants. When I say baby, I really do mean teeny tiny.  See the palm leaf? The stem to the left of it? A small beautyberry 'shrub'. Callicarpa dichotoma 'Issai' was transplanted to an area where the weeds, grasses and rushes, are taller than this little guy. He needs to be marked, and remembered.

Another area in my garden, lots of oak and hickory leaves cover the garden. I am not going to rake out the leaves...they are just there. But the question arises, where are the plants?

I use various forms of marking where plants are located in the garden. Above you see a bamboo stake with a plant tag, pretty straight forward. It is marking where a deciduous azalea is planted.

Sometimes I don't have a plant tag so I use whatever is handy. For this struggling Mahonia eurybracteata 'Soft Caress'  I used a stick. I have a lot of sticks that have fallen into the garden. Seemed like a good choice.

Last year I ordered some plant labels because I have a lot of bulbs planted all over the garden. I forget how many I ordered -- maybe 100, maybe 500- I don't know. Whatever the number, it wasn't enough. In the photo below is an Autumn Crocus...hence the AC.  It helped this spring when I was looking for new growth emerging. I have stepped on a few of them though, breaking off the top. I found more than one wayward plant label snapped off. Oops. 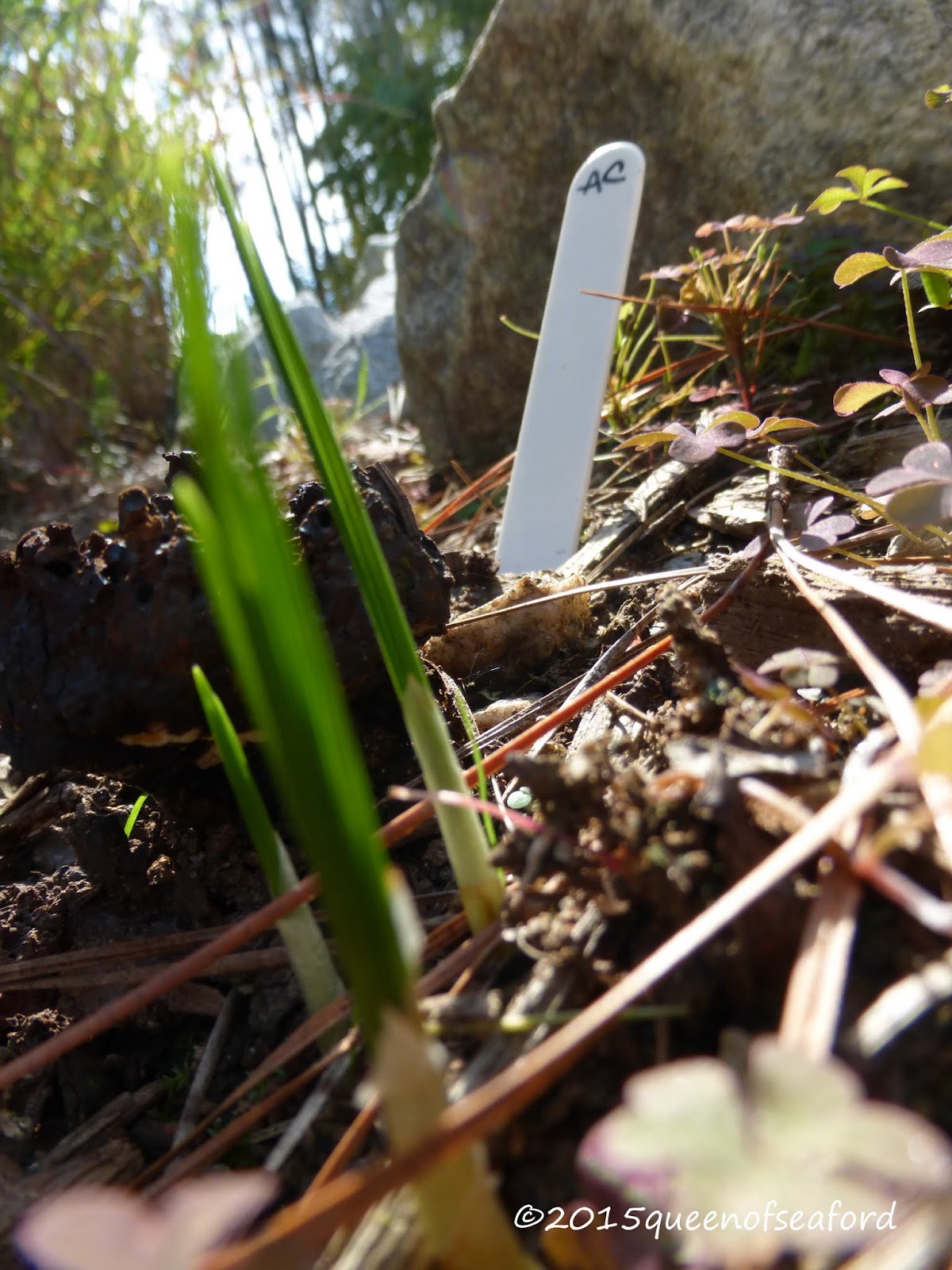 Sticks also make a good defense against critters who like to dig up newly planted Hellebores. Sadly I didn't realize I needed to put up a small barricade, so I lost two out of the three newbies. 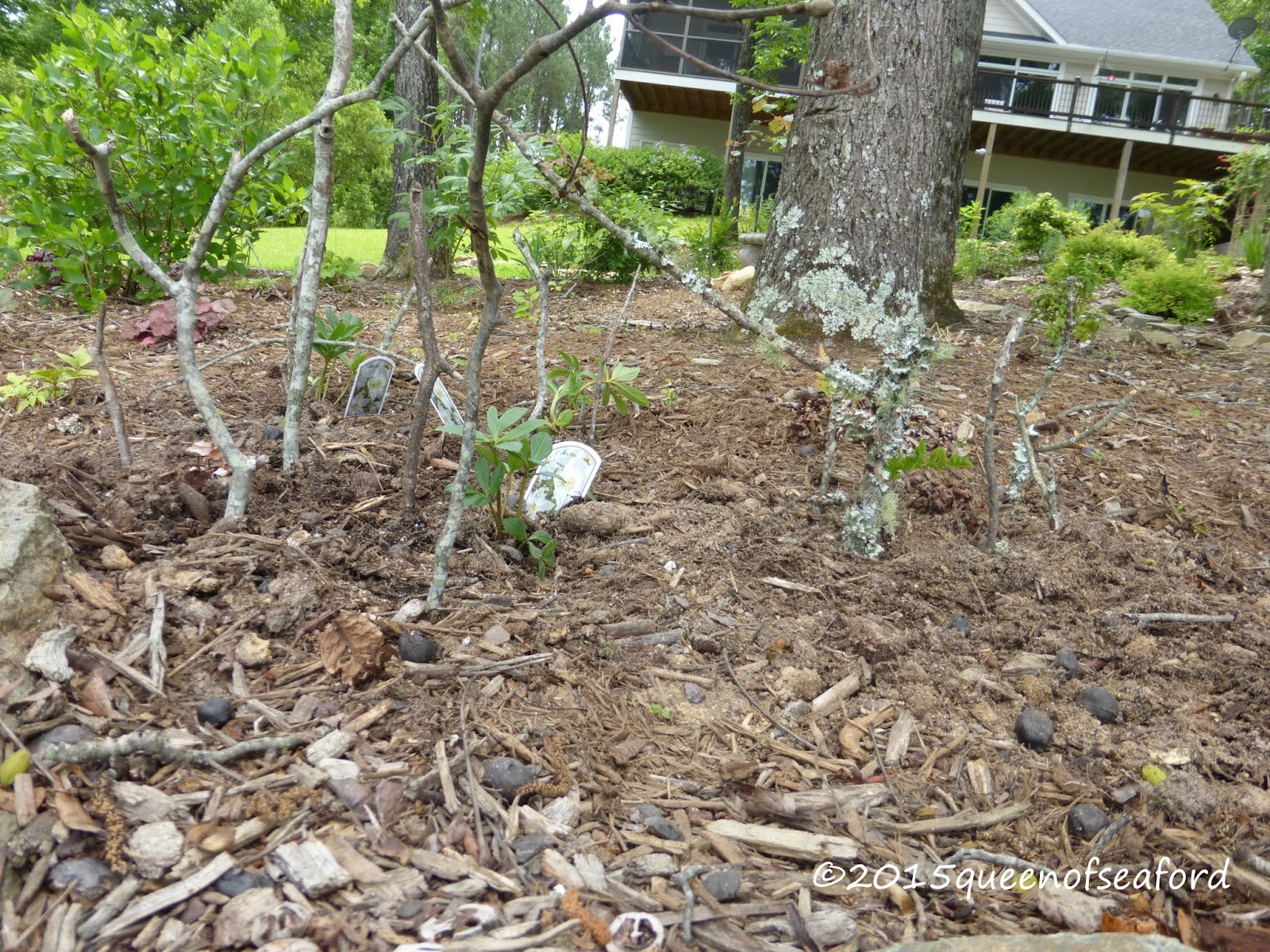 I was lucky enough to receive some ferns from a friend from Virginia when he and his wife visited. His ferns came with plant tags-- since they are deciduous ferns, having the location marked is helpful. 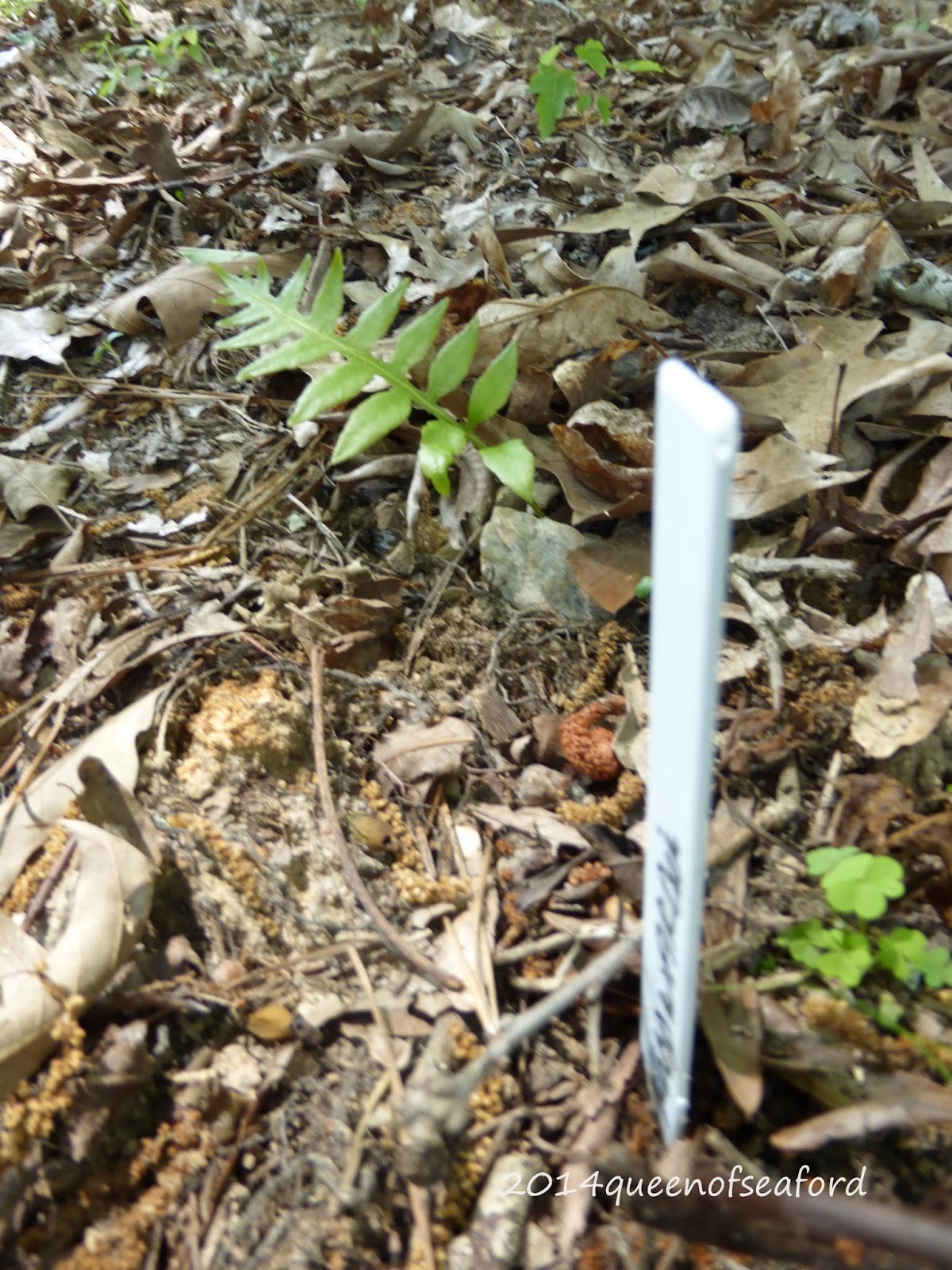 New trees and shrubs needed a new way to mark their locations in the woods. I ordered some bare root Cornus florida, Dogwoods, and Hamamelis vernalis, Witchhazel from Missouri Department of Conservation. I think it was 10 seedlings for $8.00 - a bargain in my mind. These seedlings are not small, averaging about 3 feet tall.

See the purple ribbons? Yes, my latest tool for marking my newest plantings. 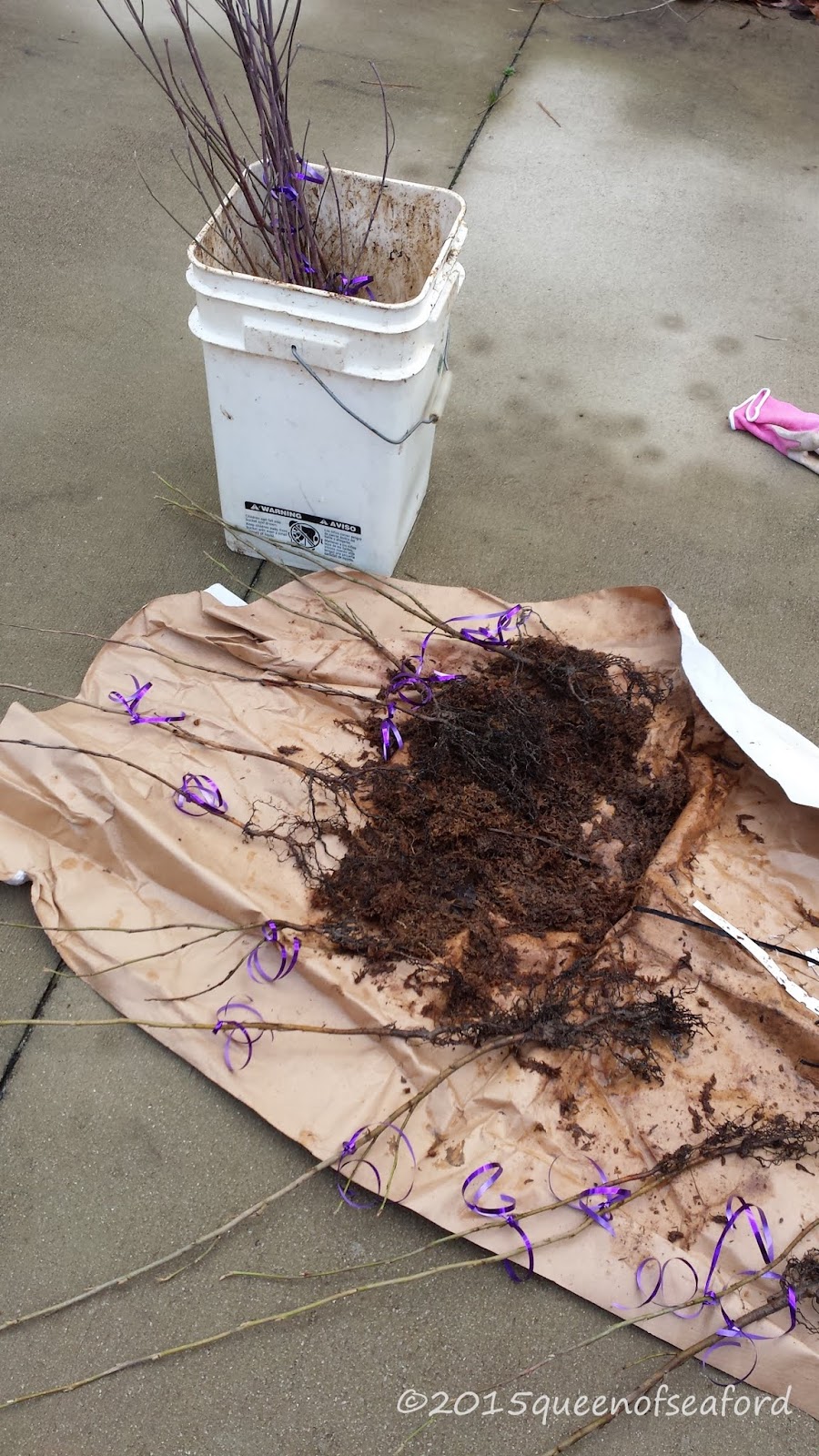 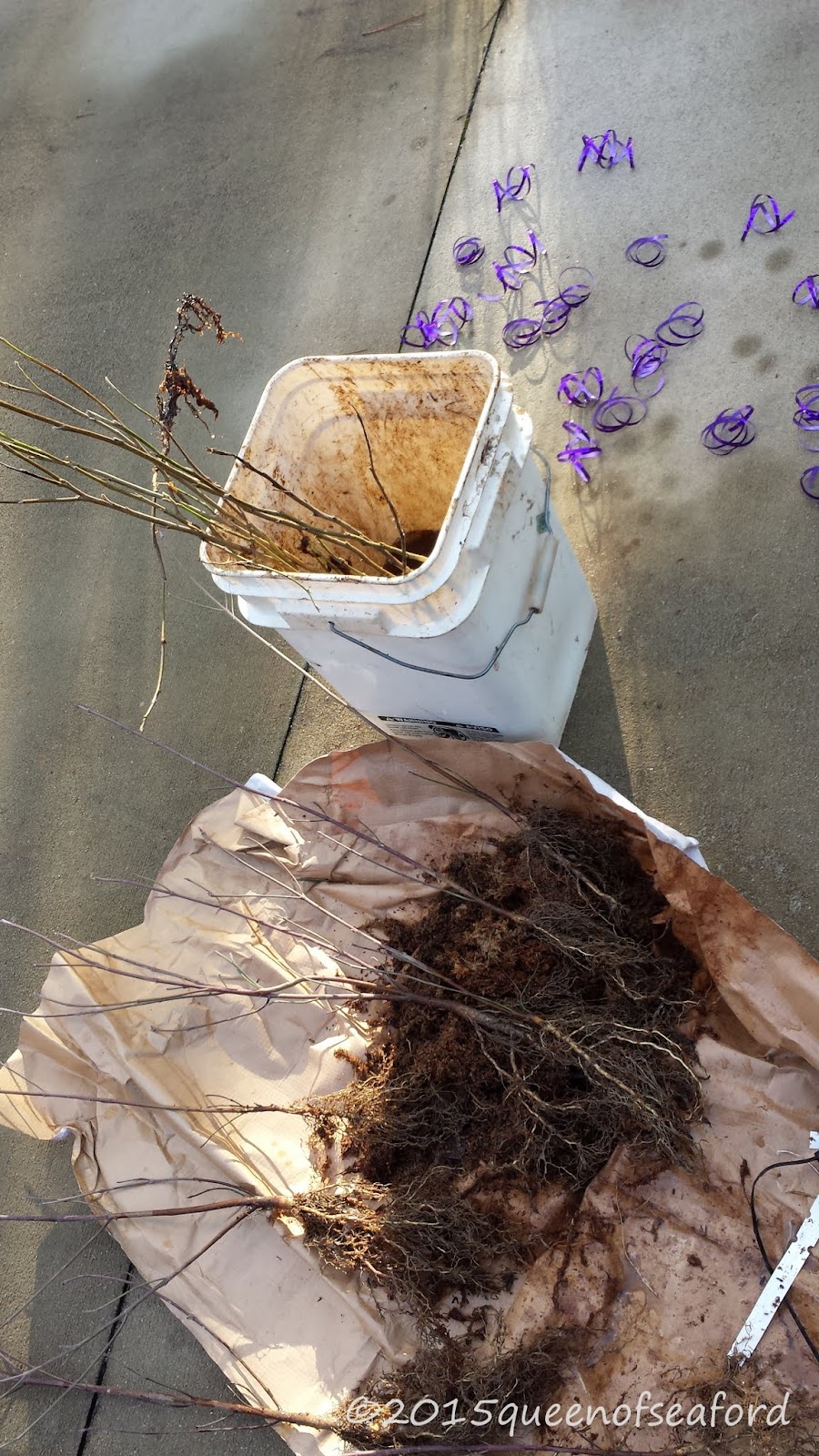 After soaking the bare rooted seedlings, I tied a purple ribbon on each one.  After planting them around the woods,  I looked back, checking to see if  I could 20 seedlings in the woods.  See the ribbon below? It does stand out in the landscape enough to find each of them to water them and check for new growth. 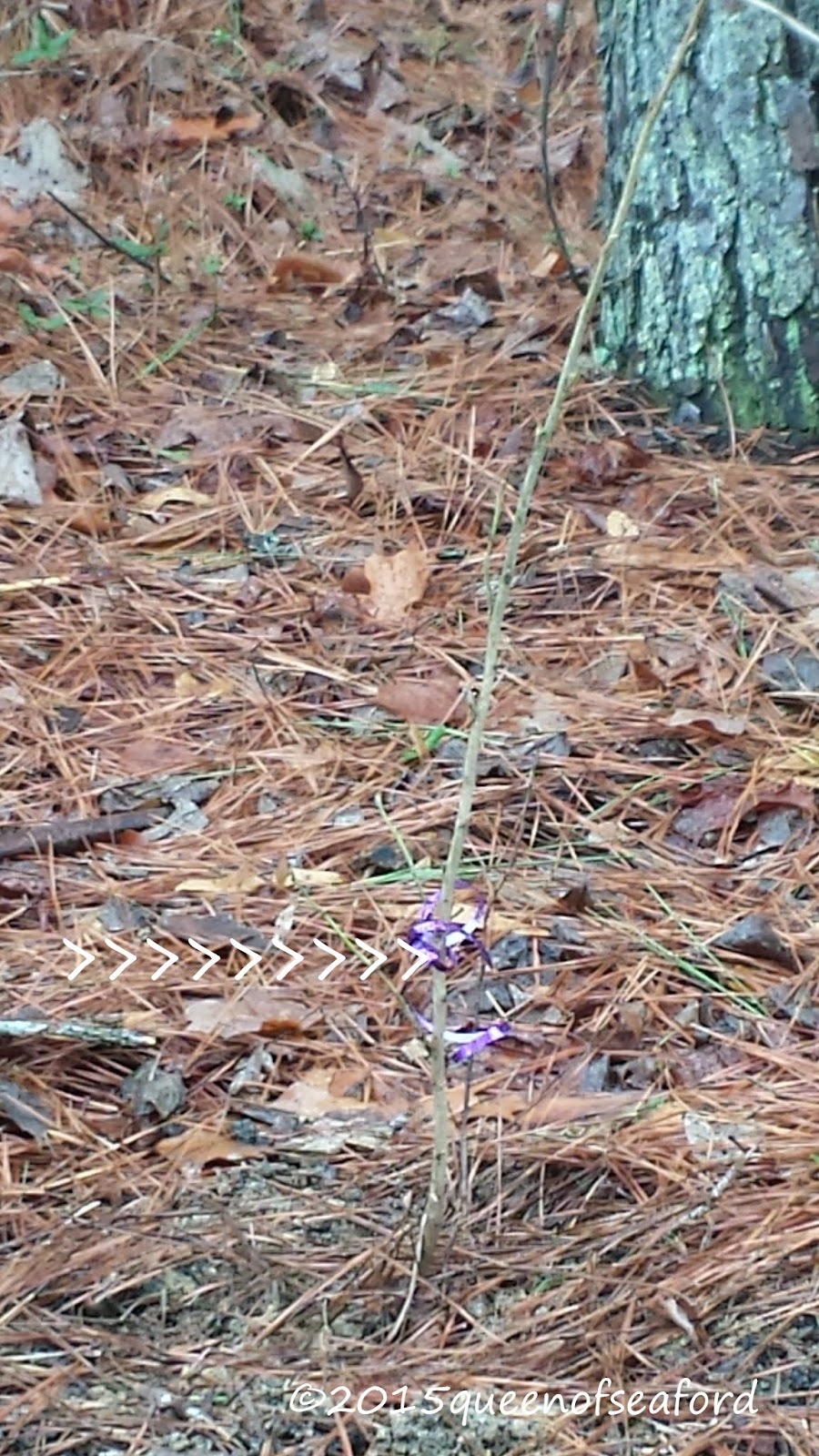 My missing Chionodoxa alba finally appeared. I really need to mark its location. 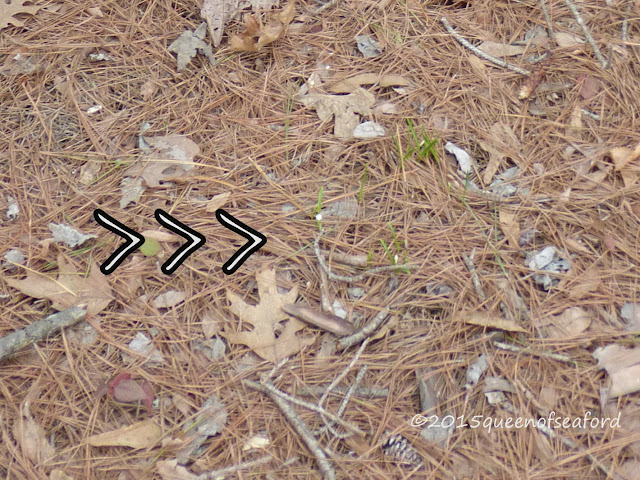 Again, up by the street I used a wayward stick...marking some Gladiolus. Seems pretty straight forward early on, but now that other plant material has grown and filled in, it was a good idea to mark the spot. 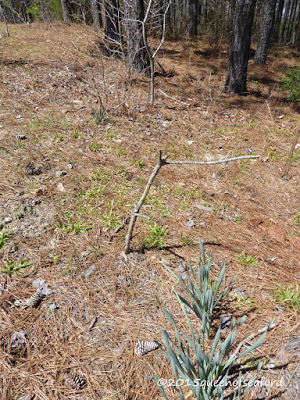 Back in the backyard new ferns were marked with sticks as they were planted. I ordered some New York ferns, Thelypteris noveboracensis. After planting I found the notes from a talk my friend gave on ferns....his take was New York ferns were on the aggressive side. Oh man. Well, looking for the sticks wasn't as easy as I thought it would be. Ordered five ferns, dormant, bare-rooted. Planted about seven (the bare-rooted ferns were easy to divide). So now I had about to find seven sticks marking bare-root ferns. I found some and planted them in planters. 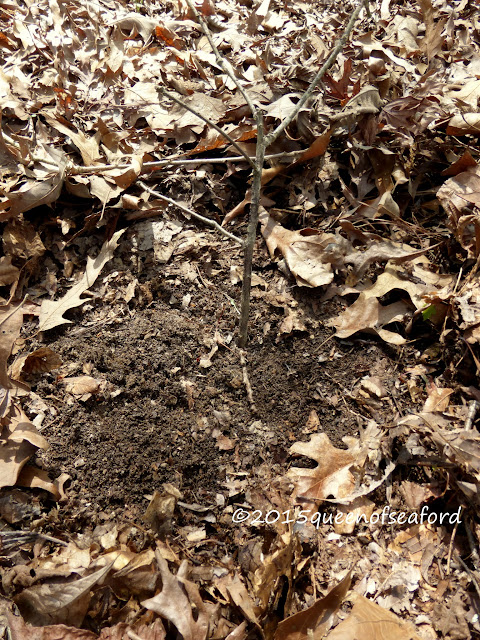 So far I haven't seen any of them come up. Since then I have done more reading on Thelypteris noveboracensis, apparently the further south, the less vigorous they are. Hoping some of them come up. 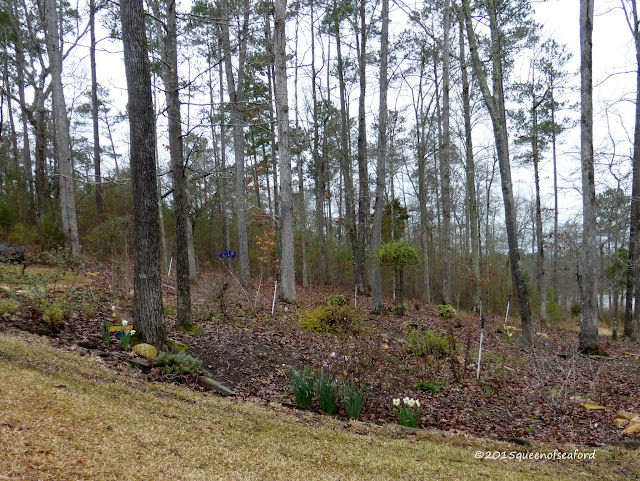 As you can see, this post was started a while ago...daffodils were still blooming. The garden has filled in but still no New York ferns to be found. Feels like they should be up by now. How do you mark your bulbs or shrubs or bare-rooted saplings or ... or? I think I will find another way to mark new plantings as the sticks seem to disappear over time.


©Copyright 2015 Janet. All rights reserved. Content created by Janet for The Queen of Seaford.