Five years ago this week we moved from Seaford to our present location in South Carolina. For those who are new here, we built our home on a lake in Upstate SC. We started from a blank slate, each year offered its own challenges--deer, voles, rabbits, dry conditions, wet conditions and my own fickleness, changing things up just because. Some of the changes will be addressed in later posts. Each year I take photos of the various parts of the gardens. You can see previous years' posts here- 2014, 2013, 2012, 2011, and when we were building in 2010.
So from the very beginning we looked like this-- 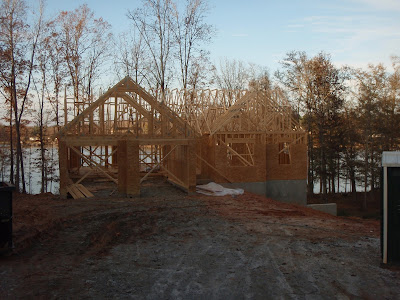 We had some big changes this winter with the ice storm and an early snowfall-- November 1st! The ice storm will be talked about in my next post.  Last year's photos are posted to compare with this year. Follow the links above to see yearly progress.

View from the front door...notice the size of the Magnolia grandiflora 'Little Gem' in the middle of the yard.

And the Magnolia now...ice storm damage.

The driveway garden has had more added to it. I do like having a container near the Crape Myrtle to add some color.


The front gardens are filling in, in most spots.


The winter was hard on the Gardenia 'Frostproof'.  I was going to cut it back, but never got around to it. Now that it has bloomed, perhaps I will get out there and cut it back a good bit.  The Japanese Maple is certainly happy. Acer palmatum 'Sango-kaku'

The backyard is ever evolving.  Left side as you look from the deck.


Right side as you look from the deck.

The Japanese Maple near the white container in the photo above had severe damage from snowfall, a third of its crown broke off.

The backyard, looking back to the house from the lower right corner.

Same shot, this year. Included the patio on the right and the slope to the lake.
Out on the dock, looking back at the house, far enough away to not see all the weeds.

One of the major changes this year - we bought the lot next door to us on the left. Too many folks were looking at it with plans to build...soon. Since it was a bargain price, we swooped it up. The only plans right now for us it to have it bush-hogged. There are a lot of blackberry brambles, honeysuckle vines, and scrubby trees that need to be thinned. After bush-hogging I am not sure what we will do with this lot, though my husband says he sees a Sourwood, Oxydendrum arboreum, in its future.


We got solar panels this past year and are really loving it! Also planted some Rudbeckia varieties near our well. It adds a nice punch of color. 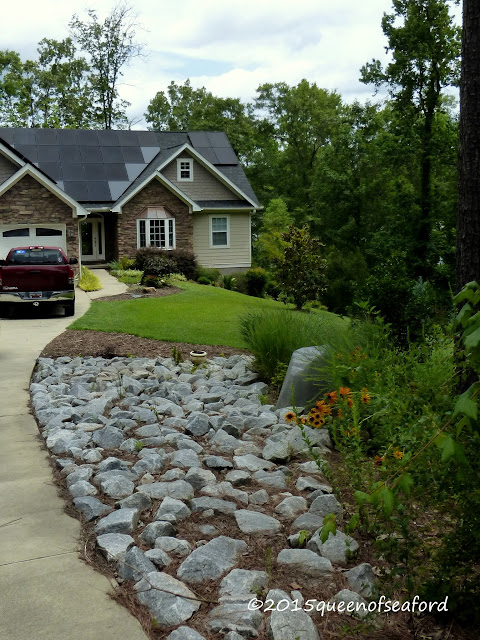 There is also a new blank spot in the front yard. Grass was thin, so we added some mulch on top of a lot of cardboard. It is now waiting for me to choose some plant material.

The shed got a new plant-- for Mother's Day I received a Schizophragma hydrangeoides 'Rosea', a climbing Japanese hydrangea vine. It will climb on the old iron railing on the right of the door. The blue cypress to the left of the shed along the prior property line really took a hit from the February ice storm. My pruning skills came into practice to keep them shaped nicely.

More of the Fling posts will be coming. I wanted to get this post done as our anniversary as South Carolinians is this week. If you haven't done this, think about taking a photo each year on a given date. It is amazing to see tree growth and foliage filling in. Some changes are subtle and others are significant.

©Copyright 2015 Janet. All rights reserved. Content created by Janet for The Queen of Seaford.