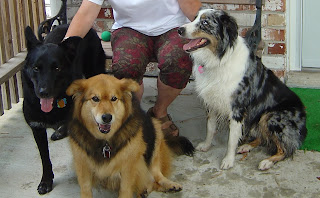 I have had a couple of comments about the herd so I thought I would give a little background. Monroe was acquired shortly after we moved here from Germany with our first dog, Dawn and our kitty Miss Jax. I had read that if you have a dog who has good behavioral traits and it is getting on in years, don't wait for the death of the first to get a second dog. The older dog will 'train' the younger dog as to the 'rules of the road' so to speak. We didn't have to do much in the way of housebreaking nor manners with Monroe. She and Dawn were a pair for 7 more years. After she died we needed to get a friend for Monroe....Newton. He is the big black one. His brother was far more gregarious but Newton had the cocked ear like Dawn....my heart took over. Newton is a bit skittish, but once he likes you...he is a love. After Hurricane Isabel (sorry to keep bringing this up) Miss Jax died. We told the kids we would get another kitty after the house was put back together.

I asked one of the kids to go by the vet's office on her way home and pick up some meds. While there they asked if we knew of anyone who wanted an Aussie puppy. The family had moved and he needed a home. We looked at each other when the question was repeated at home..... another puppy? I guess I could say the rest is history. He was nine months old when he came here, so not the Roly-poly puppy stage. Skyler came to live with us and has been entertaining every step of the way. I do miss having a kitty, though three animals is enough for me.