BABIES, There are BABIES!

I like composting.  When we moved from Virginia I gave my worm bin to a fellow Master Gardener so I needed to find a way to compost in our new home.  We  bought a tumbler composting container.  Once the first tumbler was full (rather too heavy to roll every easily) we got another.  Since we take our trash to the recycling center, any amount we are able to compost helps.....that and we have clay soil and could use all the compost we can get. They tuck nicely into the tree line, near the deck steps.

Well, I still wanted some worms.  Since we had a number of plastic bins that we used to move some things down here I was ready to get a bin started.  I was so careful drilling the holes in my first bin, not so this time.  I got the drill and just started making holes. 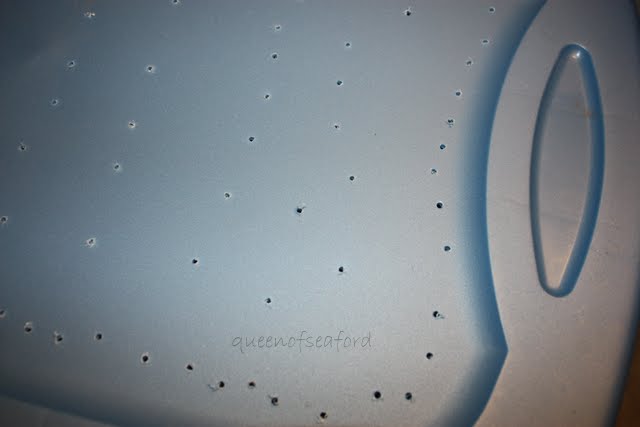 The worms need air circulation, so the lid and the top 1/3 of the sides have holes.  Inside there is a nice bed of shredded newspaper, as damp as a wrung out sponge.  On top of the shredded paper is a section of newspaper, also damp.
I first bought two containers of red worms.  I went to the bait store, I did this in Virginia to augment the worm population.  One thing I forgot about was light................ about half of the first group escaped.  When you set up a new bin sometimes the worms are a little wild and can roam.  I don't know what their issue is, maybe they are just a little shook up from being in the new digs.  Now we have a lamp on next to the bin.  It is a small wattage CFL, so it doesn't bother me too much to leave it on....  'tis better than finding half the worms stuck to the floor in the morning.  I did stop by the bait store for another container of worms. 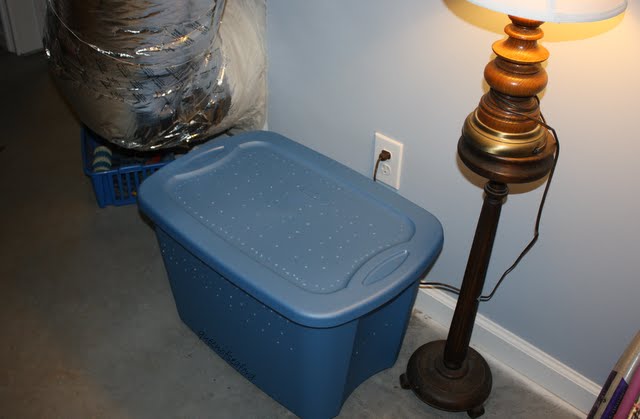 I keep the bin in the storage area on the lower level of the house.  ﻿To start a bin you add small amounts of food, you don't want stuff to get rotten waiting for the little guys to chow down.  Tonight while downstairs letting the dogs out I checked the bin.  Guess what I saw on the side of the container???? Well, ok, I did give it away with the title, a baby worm!!!! 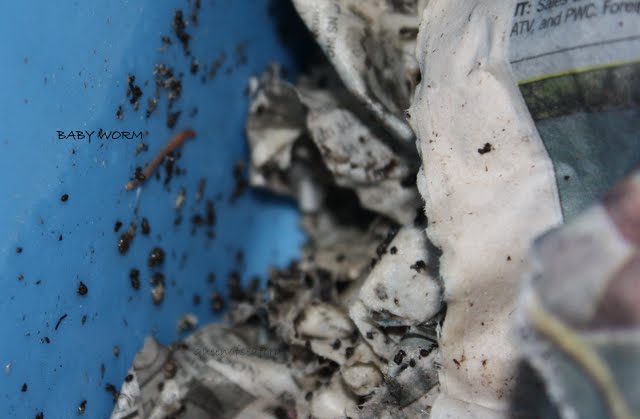 Just to the right of the words 'BABY WORMS' is the little guy.  This is exciting because it means they are happy in their new home.   I can soon start to increase what I add to the bin.  I have a melon sitting on the counter that we need to cut and eat.  Worms LOVE melon rinds.  They will be thrilled!
To give you a better perspective on the size of the worm, here is the larger picture. 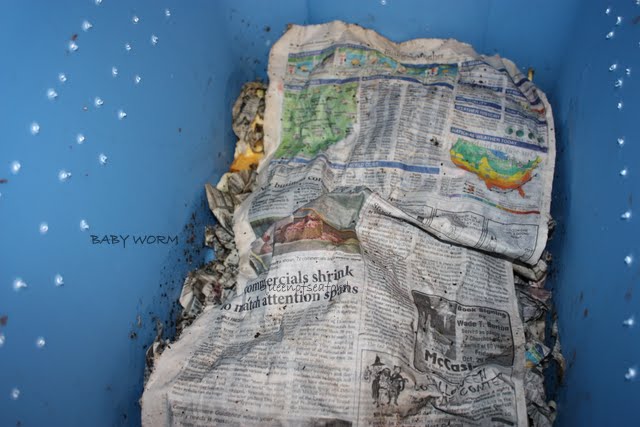 Worm bins are kind of fun, they don't stink, and they produce some great compost material.  Go worms!!!
For some good web references on vermicomposting here are a couple sites--
http://www.redwormcomposting.com/
Cooperative Extension- http://www.ces.ncsu.edu/chatham/ag/SustAg/vermilinks.html-- this one has a lot of links
and the one I started with--
http://whatcom.wsu.edu/ag/compost/redwormsedit.htm  Give it a try, it is easy!

Email ThisBlogThis!Share to TwitterShare to FacebookShare to Pinterest
Labels: vermicomposting