Voles and the destruction of a garden 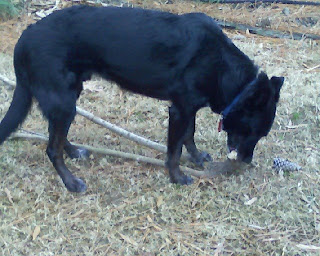 I didn't think I was going to write anything today until I took two of the dogs outside. Of course Skyler was chasing his ball while Newton just meandered about the yard. A couple of days ago I noticed my lilac bush leaning into the gardenia. I wiggled it a little and sure enough...the voles had struck. I had hoped a few floodings of the yard from storms (tidal) would have depleted the population, unfortunately I was wrong. Guess it is time to get the peanut butter on mouse traps and do my own depletion.
Anyway, Newton seemed to think that the pulled up remains of the lilac was his "stick". When he was a puppy he took out a few small shrubs, thinking they were good toys with which to play fetch. This is only taken with my phone, didn't have the camera with me. I should have kept track of all the plant loss due to voles, ROTTEN CREATURES!!
at 1/13/2009 02:06:00 PM