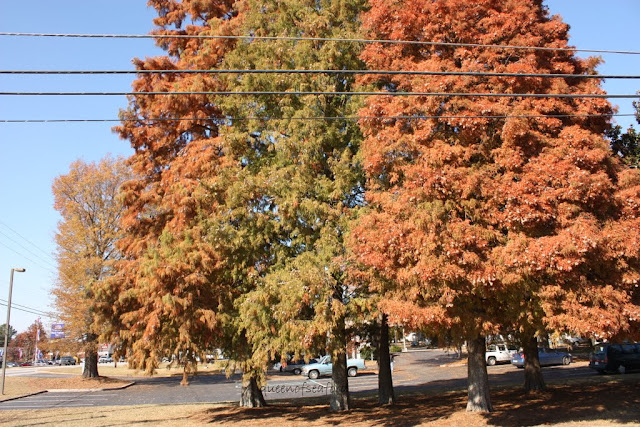 This past week while at an Arboriculture class at the extension, one of the slides was of  Baldcypress.  It was funny as the trees in the slideshow were the ones I have taken photos of as we drive by.   I had a red light on my way to the extension office that morning next to these trees.  Camera in hand I rolled the window down and tried to get a good picture....again.
Taxodium distichum, Baldcypress is one of two cypress in the southeastern United States.  Many people think of Baldcypress as the swamp tree with the knees.  When I first heard of 'knees' on a tree, I wasn't sure what it meant.   If you look at the photo below, the knees are visible along the back edge of the water.   These are not big knees, but they are above the water line.  The knees are part of the root system.  At one time it was believed that the knees were above the water to provide oxygen to the roots. 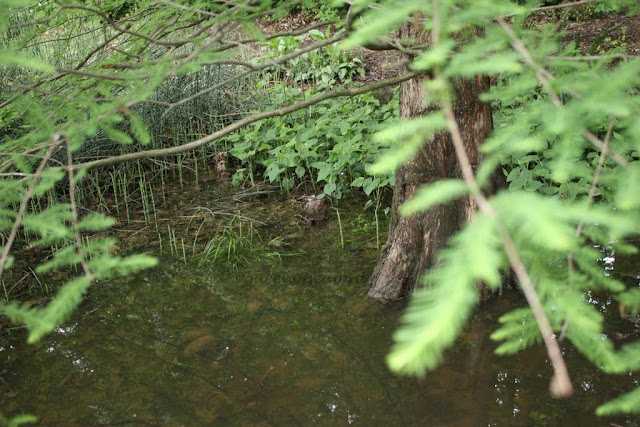 In the article from the Arnold Arboretum there is an incredible photo of the root system.  It is an amazing underground structure.  It is now believed that the root system is a scaffolding support system to hold the trees erect in the swampy conditions...buttressing the base of the tree.  My favorite reference, National Forestry Service Silvics manual, has both answers for the knees.   Trees are such interesting structures.

When learning the difference between the Baldcypress and Dawn Redwood I had two different people give me their methods of knowing which is which.  Taxodium distichum vs Metasequoia glyptostroboides.  One said Taxodium DISTichum ---leaves arranged like discs, one on top of the other, alternating along the stem or METAsequoia...the leaves meet--arranged opposite.  The other person said the Metasequoia is MEATIER...thicker leaves. Right Les? 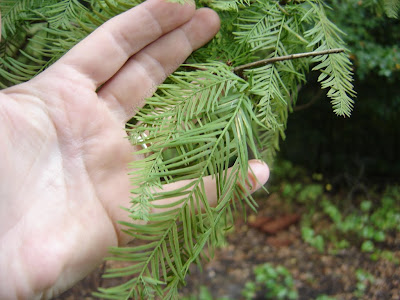 Baldcypress is called bald because it loses its leaves in the fall, after turning a glorious golden color.  It is  uncommon for a conifer to lose its leaves.  This tree is native to the US, its native range is from along the Virginia southern coast through the Carolinas, moving west into the Piedmont, south to Florida and west to Texas, including the plains of the Mississippi basin.
The bark is reddish brown and as the tree ages it becomes shredded and coarse...it can peel off in strips.  The young tree is pyramidal in shape, but as the tree matures, the top flattens out.    The trunk flares out at the base, often quite enlarged. 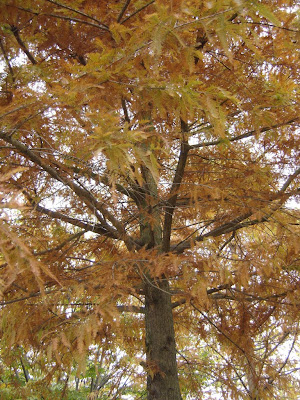 The moist wetlands of river basins are the choice sights for these trees.  Knees seem to form more often in wet areas.  The varied wetland environments are an interesting read (more detail) on the Forestry sight mentioned above.   The Baldcypress do not do as well in stillwater forested wetlands as those in terrestrial forests.
The leaves are soft to the touch and drop in the late fall. In the spring the new leaves emerge for the new season. 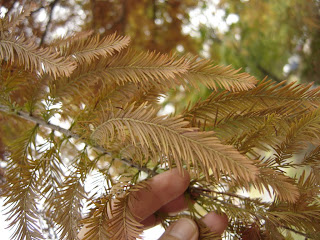 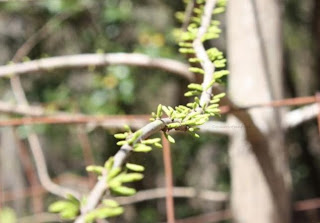 It is a monoecious tree, its fruits mature in one growing season.  The female fruits are rounded cones, either in clusters of two, three or alone.

This native tree is a large tree, growing to heights of 150 feet tall.  It is a very slow grower and can live
400- 600 years.  It takes approximately 200 years to reach sufficient size to for lumber to be harvested.  After 200 years old many do not get any larger and start to die back from the top from a fungus, causing rot from the tip.
This last photo was taken in downtown Asheville.  I was so surprised to see a number of these Baldcypress planted in an urban setting.  Maybe these are a smaller cultivar?  One can only hope. 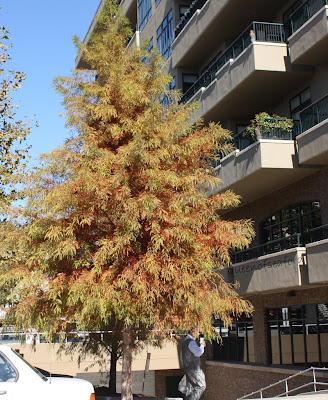 The seeds are eaten by wild turkeys, squirrels, various birds and ducks.  The tall tree tops are often the nesting sites of Bald Eagles and Osprey.
The timber is used for construction, fences, planking in boats, and many other areas.  Mulch is another product from the cypress tree and one of my commentors, Bill, sent this link along--http://chronicle.augusta.com/news/metro/2011-01-19/state-cypresses-endangered that ecosystems are endangered from over harvesting.

Florida Forest Trees sight still says the knees are for obtaining oxygen-- so  the debate still goes on.
Virginia Tech has some good photos of the fruits of this tree. Floridata is another reference in a concise format.
Next week's tree---do you have a favorite?  Taking suggestions.....