Today was a gorgeous day in South Carolina.  Yesterday was also a great day.  Yesterday we gave all three dogs a bath out in the driveway.  Good to get the winter stink off of them.  After the baths we took a stroll along the shoreline.  The lake level is down at its lowest and walking along the shore is a pleasant way to spend a little time.  As we walked along I saw a hawk, a small one.  He landed high in one of our neighbor's trees.  Lucky for me I had my camera with me.  These are probably the worst pictures to share, but I can't figure out who this little guy might be.  The dark coloring on his cheek makes me think it might be a falcon of some kind.  I will leave the better ID to some of you---- let me know! 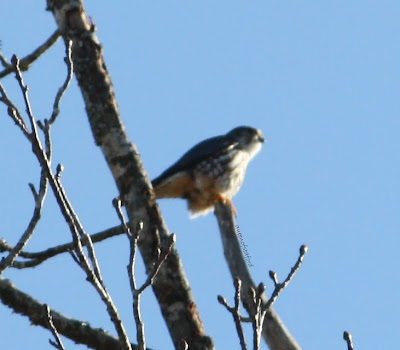 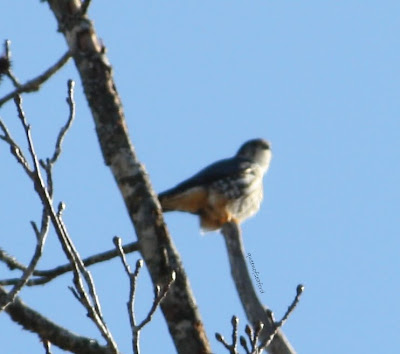 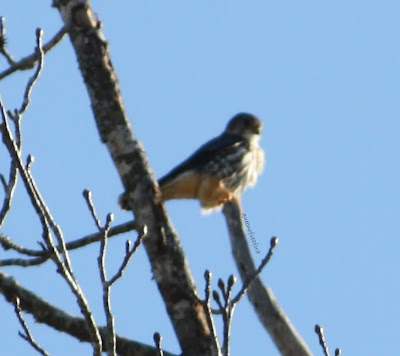 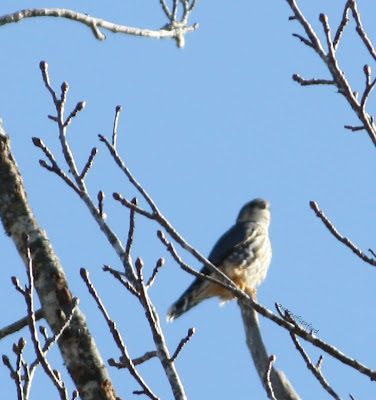 He looked around and turned his head a good bit.  In the photo above you can see the white tip on the tail feathers.   I think it MIGHT be an American Kestrel.  Those stripes on the face really make me think this is the correct bird. 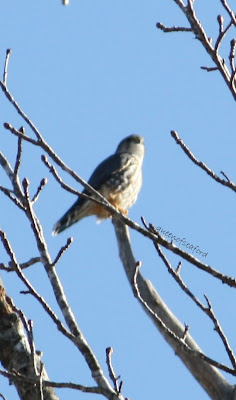 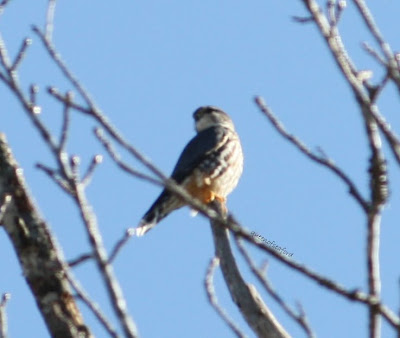 What do YOU think?  For those who didn't read or hear about the hawk in the Library of Congress, it was a female Cooper's Hawk.  She was rescued and will be treated for dehydration and eventually released into the 'wild' of DC.

Just after we saw this unknown little hawk/falcon/kestrel we saw a Bald Eagle fly up the lake.  These are such majestic birds.  Even from afar you can tell it is a Bald Eagle. 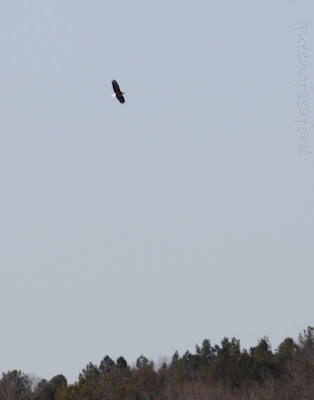 As we continued our walk we saw lots of footprints in the sandy shoreline where animals go to the water's edge.   Guess my next form of study will have to be animal tracks. 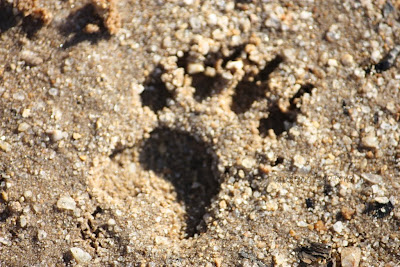 ﻿There were tons of all kinds of mussel shells and some spiraled shells, like I shared on my previous posting.  I was surprised to see one quite so large.  This is my boot -- size 7. 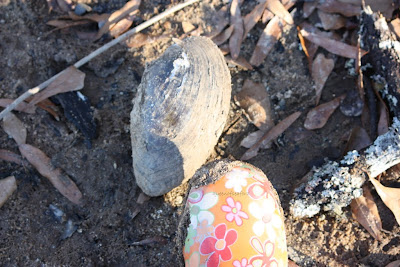 Pretty large shell.
Today was a day for working on the front woods.  I am trying to keep a balance of nature here.  Leave the trees, mostly, get rid of the honeysuckle, smilax, and muscadine vines.  I thinned some of the trees-- 5 Sweetgum can't grow in a four square foot area.
One of the places I had marked in my mind for a Mountain Laurel there was a large honeysuckle vine-- the trunk was about an inch in diameter.  As I pulled and dug this neverending vine out, I came across my Great Discovery.  I found a Cranefly Orchid.  I wasn't 100% sure at first.  Posted the photo on Facebook and did a little more investigating online.  Mine didn't seem too purple on the underside of the leaf....until I went and looked again.  This is the first picture I took.  Size and shape were right, but from this photo, it didn't look like it was dark purplish on the underside. 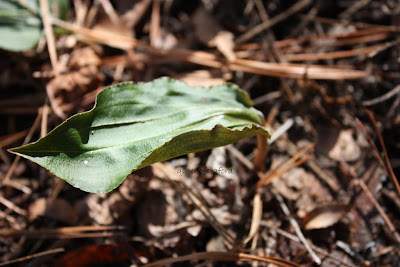 So I went back out and looked again.....it is a Tipularia discolor!! 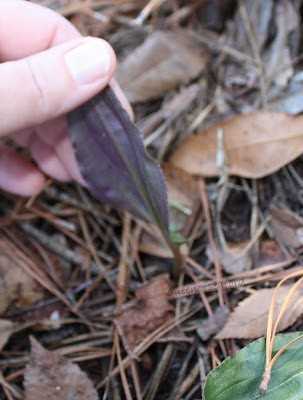 Oh yeah!!  I marked the area with some branches stuck in the ground.  Don't want the dogs running through them nor do I want to dig right there.   Will have to watch when I plant anything in there.
Another mystery to me is what is growing near the orchid.  Anyone have any ideas what this might be??  The stems are reddish and the new growth is also red in color. 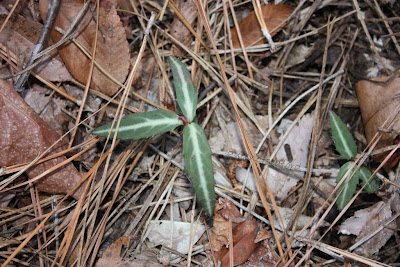 It has a sharp-toothed leaf, interesting coloring.  I am clueless to what it might be.  Help?? Daricia has provided an answer!  http://www.duke.edu/~cwcook/trees/chma.html It is a Striped Wintergreen or Striped Pipsissewa, Chimaphila maculata  thanks Daricia!! 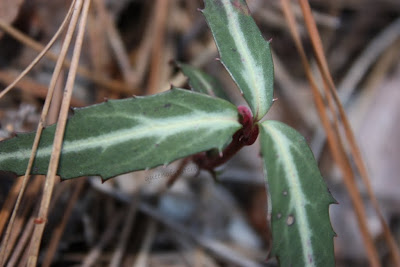 ﻿
After all my front woods discoveries I thought I would go out back and check the Witch-hazel.
Hamamelis x intermedia 'Feuerzauber'
Still just a few blooms, but it is young-- next year!!! 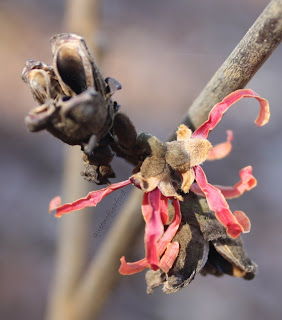