Do You Buy Plants Without Knowing Where They Will Be Planted?

A couple of years ago I started a post about this garden in my backyard. (I never finished it until tonight.) There is a large plant sale in our area (I use 'area' loosely- this sale is almost 2 hours away). I have gone three or four times since we moved here. Prices are getting higher, so I am not sure that I will frequent the sale regularly. 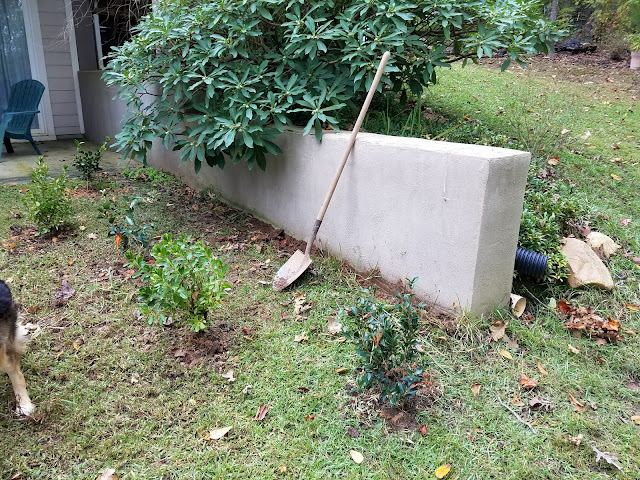 At this sale I bought a handful of Camellias and Azaleas. Not knowing where to plant the Camellias I decided to create a new garden bed. I am of the frame of mind that if grass doesn’t grow well in a spot in your yard, then mulch it and make a new garden. This area is on the north side of the house, under the deck overhang. It would be protected, have some morning sun and plenty of shade midday through the afternoon. 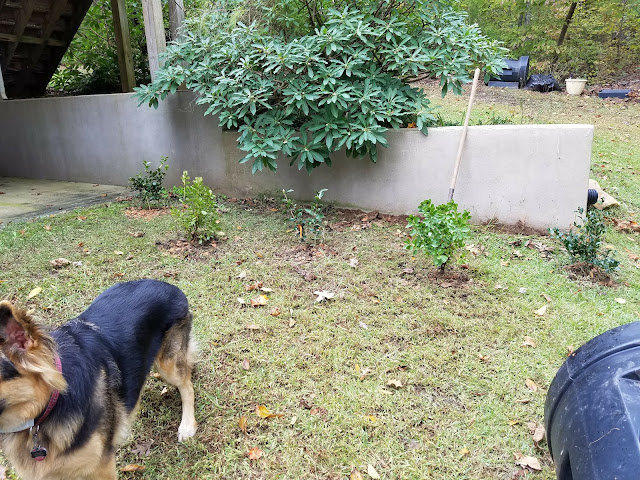 The plants were planted, garden created with the help of a certain German Shepherd. I planted a couple of the Camellias; C. sasanqua ‘Ashley Eden’, C. sasanqua ‘Elizabeth Ann’, and C. sasanqua ‘Leslie Ann’ and two azaleas, Rhododendron ‘Delaware Valley White’. One of the compost tumblers was ready to be spread. Compost and mulch and some newspaper under the mulch, voila - a garden. 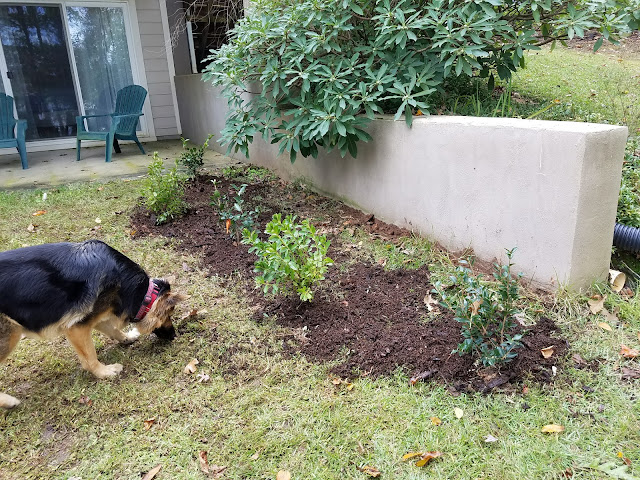 I have a couple wagons that I make good use of in the garden. This one is one that dumps, and spreading mulch goes quickly when you can dump and go. Yes, I used some newspaper over the compost but under the mulch. It was a thin layer and decomposed pretty quickly. Chickweed and Poa annua grass run rampant in our yards where grass is thin. Some kind of weed block to give me a head start was needed. 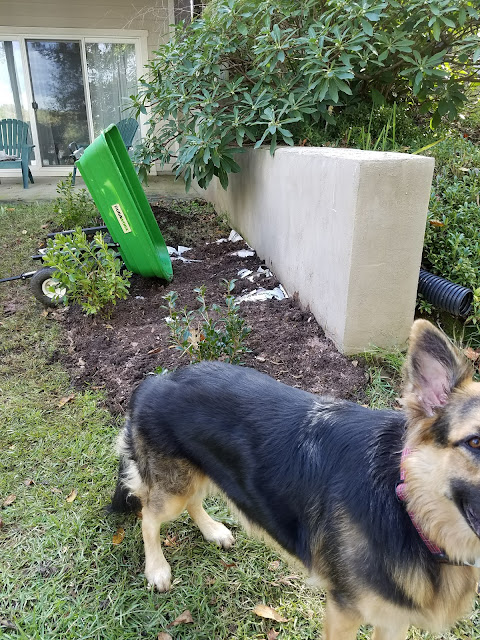 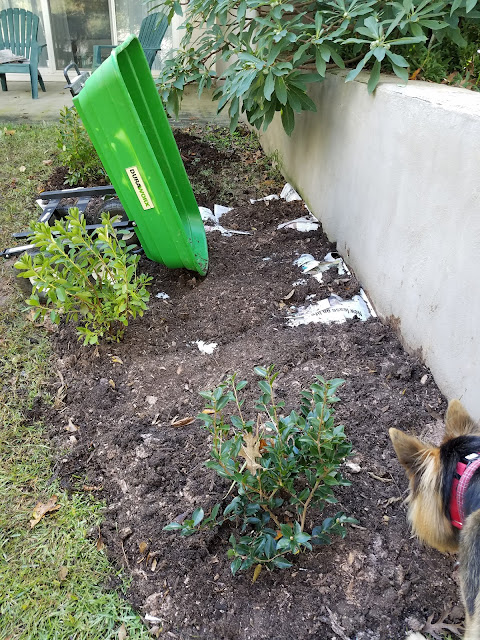 Midway through the garden prep Liebling was very interested in something in the back near the wall. What was it? A baby Eastern Rat snake, one of the good guys. 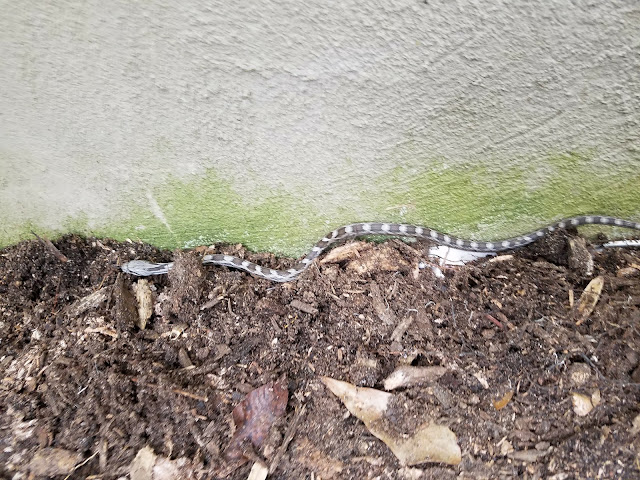 Phase one of the new garden done! Unfortunately two of the Camellias did not do well. One was moved out front and seems to be doing better. ‘Ashley Eden’ remains and has bloomed a couple of times, she is still quite small, maybe eighteen inches tall. 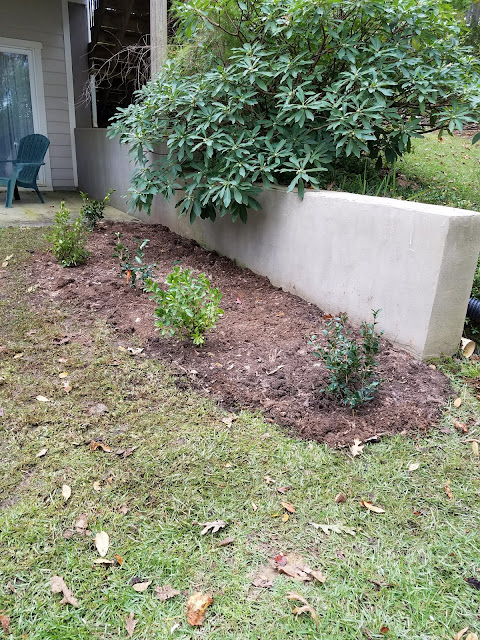 The azaleas bloomed well and are settling into their new garden. I like having white blooms, the whiteness really pops in the shade. Between the shrubs are some ferns. I figure you can’t go wrong with ferns. This fall I also planted some Trillium, we will see how well they do. I planted Trillium in the large shaded garden a couple years ago and have no idea where they are. It might be too much leaf litter. 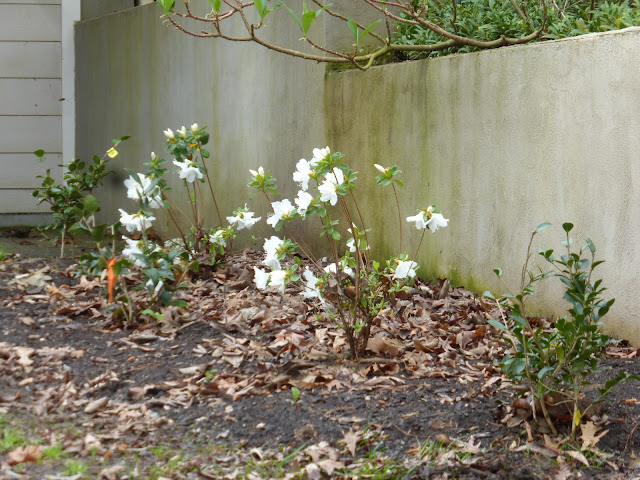 Phase two- the garden was expanded. The mulched area now goes along the edge of the patio under the deck. A few square cement blocks were added in the widest part of the bed so no one walks on any plants. Yes, I did add more. I divided my daffodils in one of the front gardens and needed a spot to put them. As I write the four clumps of daffodils are coming up. Most are about six inches of fresh green foliage already. Later this year I will place some stepping stones in a better pattern, when I know where all the daffodils are growing! At the end of the wall is very wet from the French drain and a downspout outlet. Since this edge of the garden gets sun, I planted a few Mountain Mint that I was dividing. What was I thinking?? I may need to put an edging around the mint.


Oh,inquiring minds might ask what the plant is that is hanging over the wall. It is Edgeworthia chrysantha. This is one plant. Apparently it is happy there. I have five along that side of the house, all are quite large. Next month the blooms will be at their peak, sending glorious fragrance through the garden.


Back to the question in the title of this post. Seems I always fall in love with a plant or a bargain on a plant (or ten) and then have to come up with ideas as to where they might thrive in my garden. What do you do?


©Copyright 2020 Janet. All rights reserved. Content created by Janet for The Queen of Seaford.