Starting the Fifth on the Fifth

I know I have been MIA for a while on the blogging front---time flies!  I noticed while checking the blog for info on one of my tree posts that it has been four months since posting. Facebook has allowed me to post just bloom pictures every day and many of my non-blogging friends seem to really enjoy it. It is time to update the blog with this year's garden progress report.

Without further ado- let's see how the gardens have changed over the past few years.  We moved here in 2010 - so we are starting our fifth year living on Lake Greenwood and enjoying retirement. With phone in hand to take photos that match last year's post, I set out in the yard. 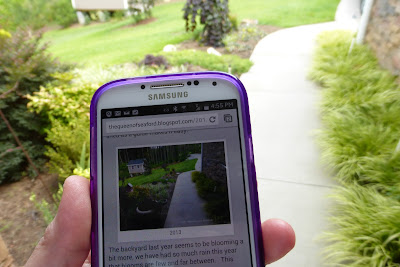 The photo below is a side by side of the left hand side of the backyard from 2010 and then one year later 2011.  Besides plants being added, weeds, deer, voles and chipmunks help change the landscape. Many plants are lost to the elements...never to be seen again. Just a good reason to buy more, right?

Here is the jungle of today. The trees have certainly filled in a good bit.  While it looks like a lot of plant material, at ground level there are a lot of open spots that may or may not be able to support something planted. With the mature trees taking up most of the water, the shade area is really dry.  I have two trellises in the garden, one has the Carolina Jasmine and the other has a Coral Honeysuckle growing on it. 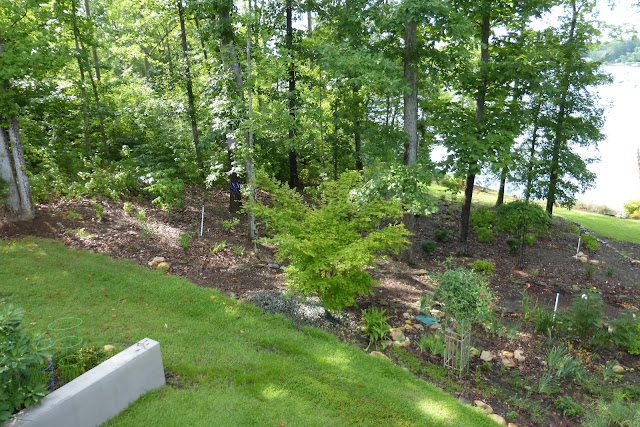 The right side of the backyard was originally sunnier than it is now. As the mature trees filled out each year, my window of sunshine has gotten smaller and smaller.

The beautiful Japanese maple 'Garnet', almost invisible in the picture from today, has filled in nicely.


Apparently last year I did a panoramic shot of the whole back garden. What I find interesting is the later blooms this year. It was a hard winter, many plants didn't bloom. Some plants died back to the ground and took a long time to show signs of life.  Many of my hydrangeas didn't bloom this year as we had another cold snap after buds were starting to emerge.

From the water the views early on were pretty stark.


A step to the left corner, the view back up to the house across the yard shows the lower gardens.

The amazing change this year is how slow the elephant ears are filling in. The garden bed with the elephant ears is filled with daylilies-- many of which had the buds eaten by Bambi and her momma. I have bamboo stakes posted through the garden and fishing line wound around like a spider web...to deter the deer. Some puppy dog went through the lines and broke many of them....now I have to restring them. The deer found the open spots-- and tasted many daylily buds.


Walking down to the water and checking out the bank....another blank palette a few years ago.


Add a few colorful chairs and more elephant ears, some grasses (ignore the weeds!!) and the bank is colorful and filling in nicely.

This year, again, check out the difference with the elephant ears from last year to this year. The shrubs along the steps are really getting big!


The front was raw when we first moved in...lots of construction destruction, compaction and lots of gravel.

The Chinese Fringe tree, Chionanthus retusus is getting really tall. In 2013 it didn't bloom, it did this year, but at the upper reaches of the branches....hard to photograph.  Last year the Lantana took a long time to bloom.

This year the Lantana is blooming! Now if the Daylilies, Hemerocallis 'Sammy Russell' the Lantana AND the new Tiger lilies would all bloom at the same time..... I would have a nice show of color..all hot colors.

The grasses along the driveway and the Crepe myrtle are doing surprisingly well, considering this is a seldom watered area.

This year I added some Sun Coleus in a large container...adding some color along the drive.

The front garden is still a work in progress-- some of the Gardenias are doing very well, and some, not so much.

The Loropetalum 'Daruma' are very happy under the bay window.  One perennial that I  was very happy to find is Japanese Aster, Kalimeris pinnatifida, it is a nice pop of white sprinkled through the garden.

To this year....what a beauty!

Another shot of the Japanese Asters, Becky daisies, and Coral Bark maple.

The side yard is mostly shade. It is the 'Green and White Garden'


This garden is Deutzia gracilis 'Nikko' blooming white tiny flowers in the spring, a couple variegated Hydrangeas (which are not going to bloom as all the buds from last year froze) and this year I added the white and green Caladiums. It is an easy garden bed to tend to.

The favored plant in February and March, Edgeworthia chrysantha was quite full last year.

The winter took its toll on it this winter. As it is a zone 8 plant and we had single digit temperatures, I am lucky there was only a little dieback.

Another area that took a hit with the freeze was this Hydrangea area.....

Only one of the hydrangeas is blooming now- it is one of the Endless Summer series. The Callicarpa dichotoma 'Issai' is huge. I am thinking about taking them out as they are reseeding everywhere.

The lower side is slowly getting swallowed up with honeysuckle vine, blackberry brambles, and other wild things from the woods.


This winter I am getting in there and cutting it back.... not now, too many bugs.

So now we are back to the front -- my view from the front door.

And this year's view....and no, the shutters aren't painted and put on the shed yet.

I will be back on a regular basis....I promise. Can't wait for our Portland Fling. Hope to see you there!


©Copyright 2014 Janet. All rights reserved. Content created by Janet for The Queen of Seaford.