For the past week or so we have been moving mulch.  Seemingly mountains of mulch.  In reality it was 10 cubic yards of mulch.....but most of it was to be used in the back gardens.  You know....around back and down the hill to the very sloped gardens.
Thankfully we bought the cart to go behind the lawn tractor last year when we put some rocks in the garden.  Charlie loaded and loaded and loaded and dropped big piles of mulch all along the pathway in the back garden.  I had some more weeding to do and lots of little baby plants emerging, so I didn't want mulch dropped into the garden bed directly.

This garden bed, above, Charlie lined the edge of the garden with newspaper and piled a lot of mulch throughout.  It is mostly daylilies-- already up.  Other plants in this very wet bed include Cardinal Lobelia and another cultivar Lobelia 'Queen Victoria'...red foliage and red blooms.  Elephant ears are quite happy in this bed.  Along the back of the bed are three Magnolia 'Little Gem' and a Cryptomeria japonica 'Black Dragon'. 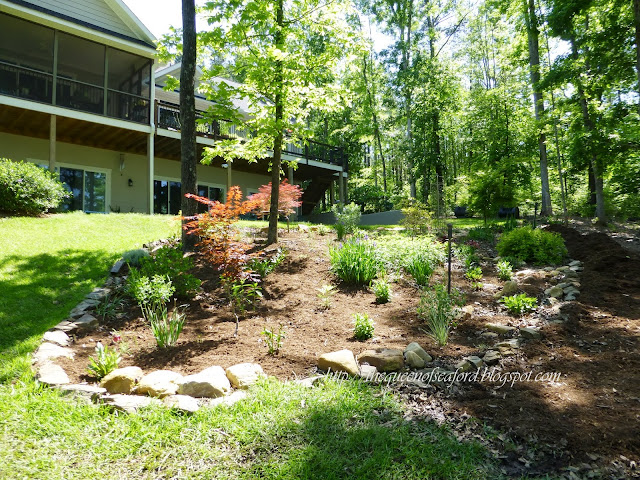 This one is sort of a middle job photo....you can see some of the piles of mulch on the high part of the pathway.

The beds along the sides of the house just needed a little top dressing.  The daffodils still have their foliage up in the garden,  don't want to cut nor cover it.   The Deutzia gracilis 'Nikko' is just about done blooming, just a few blossoms left.    You can see that the yard slopes down toward the back of property.

The shed in the front yard shows the slope.   Hopefully the shrubs will hide the cinder blocks in the next year or so. 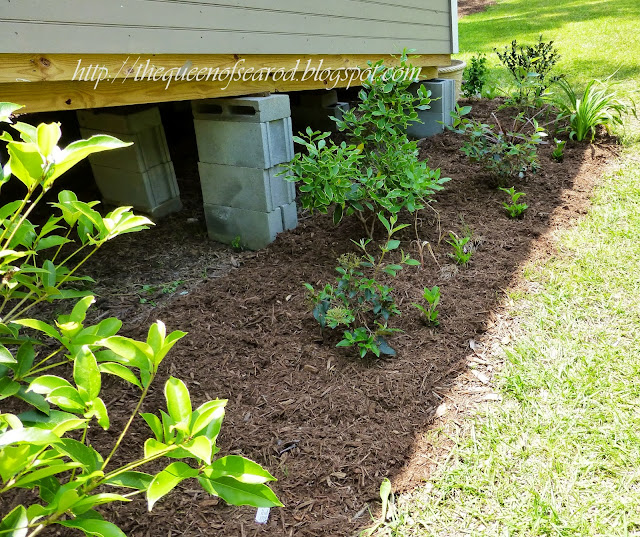 Everything looks much better with a fresh layer of mulch doesn't it?

Part of this front garden got some edge dressing with the last of the mulch mountain.    We also had to patch some areas of the grass where the dogs and the winter wet weather makes it so thin. 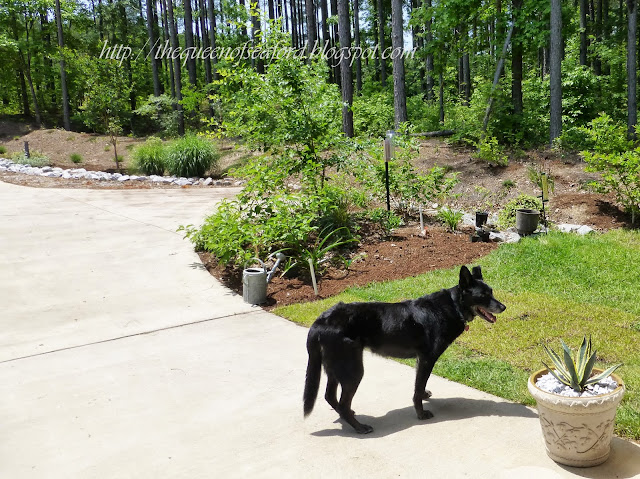 Most of the mulch went to the back.  Thank goodness for the cart and tractor.    Love the flagstone patio bordered by the Catmint, Rosemary and various goodies. 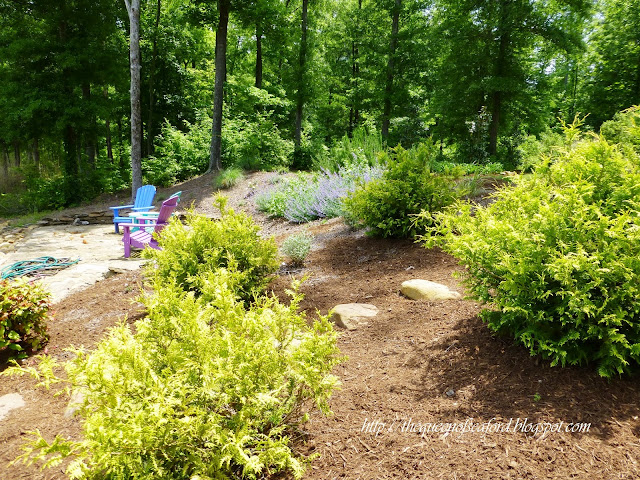 Looking back up to the house, you can make out the beds, now ready for this growing season.  Now mulched the plants stand out and have a presence in the garden. 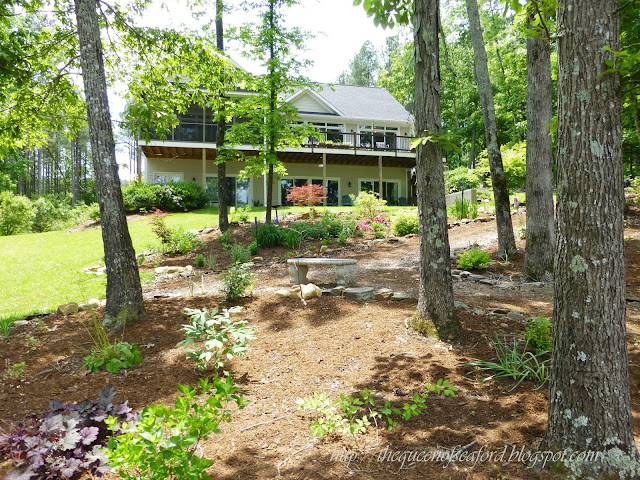 Lest you think I done with the mulching....there are still a dozen bales of pinestraw waiting, waiting since last year to be spread.  ugh. 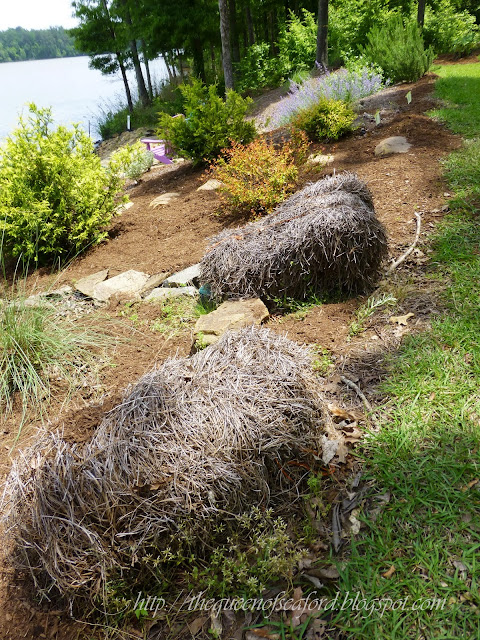 Once done, my gloves removed and my shoes taken off....I was in great need of a shower!! 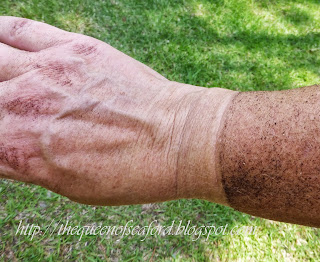 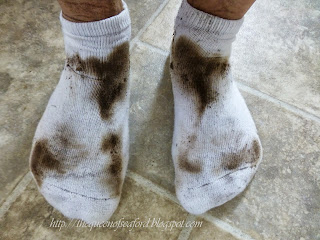 Before showering I walked the yard and got some of these pictures and saw a new little friend. 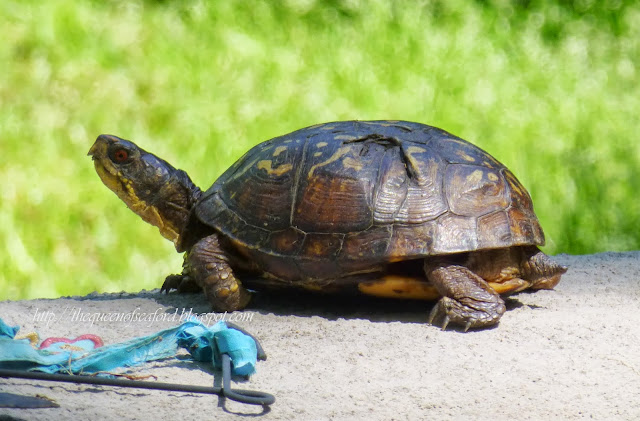 He was on the wall by the side garden.  I was worried about him falling off, it would be a three foot drop.  It appears he has had a few bumps and bruises already, see the cut in his shell.  Poor turtle.  I moved him into the garden, under the Edgeworthia for him to forage. 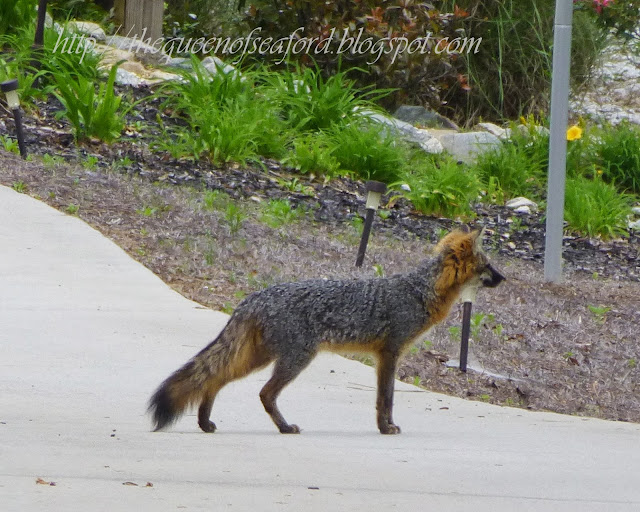 Is your garden ready for the summer?