Come Walk With Me


This past Saturday my friend Ann and I were lucky enough to participate in a nature hike through Steven's Creek Heritage Preserve.    What a wonderful place!  It is over four hundred acres of unspoiled beauty.  The guide was Patrick McMillan, host to ETV's show "Expeditions".  What a great guide for this adventure.  Wallace Wood set up the tour.  He is associated with the Upper Savannah Land Trust.  What a great piece of land. 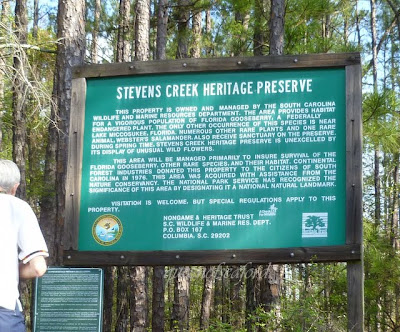 The tour was advertised as 1.5 mile long, Ha!! Thank goodness we were in the early hike.  We saw so many interesting plants and heard birds high in the trees.  Patrick can ID many birds by ear, nice to have that wealth of knowledge.  He used the iPod app for bird calls to learn many of them.
The hike started off in the upper pine forest.  Pine forests have more acidic soils and most of the understory plants are generally evergreen.  The more deciduous the forest, the more deciduous the understory plants.   One of the first shrubs he talked about was Ilex cuthbertii a deciduous holly related to I. decidua.  This plant is only found in South Carolina and Georgia.  This small preserve is host to so many special plants.   The pine forest area was once cotton fields, now most all the topsoil has washed away.

Most of the pictures are in order of the hike.  The flowering crab-apple is fragrant, pretty white blooms. 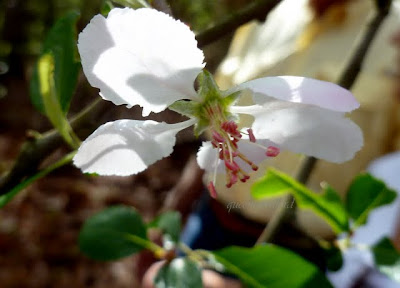 We traveled along the path, heading into the lower forest along the Savannah River.  As we walked we saw differences in the terrain and the vegetation.   More Ostrya virginiana, Quercus alba, Cornus florida, and other deciduous trees were more plentiful.    Dogwood, Cornus florida, are some of the most shallow rooted trees.  The one in the picture below looks dead.  We had a bad drought last summer and it looks as though the leaves came out on the dogwood and crinkled up and died, without falling off.  It is not dead though...look closely at the new growth. 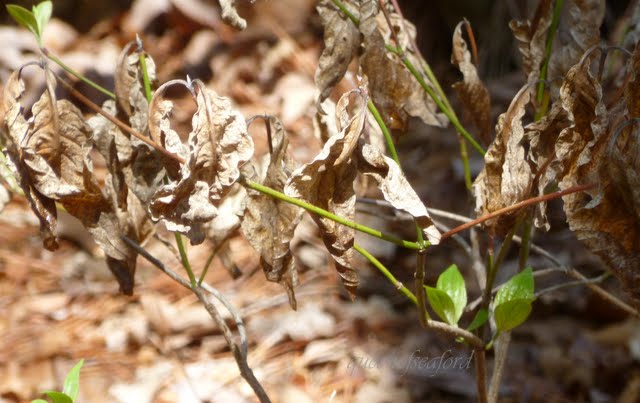 There is hope that this one and its fellow dogwood neighbors will live and continue to grow ...provided we have enough rainfall this year.
Lots of Wild Ginger, Asarum was coming up through the leaf litter.  This one has a common name of 'Little Brown Jugs'.  The evergreen leaves hold on to many of the plant's nutrients, especially Calcium.  As you move further into the deciduous forest, the soils are less acidic and have far more nutrients are present, calcium and magnesium to name a couple. 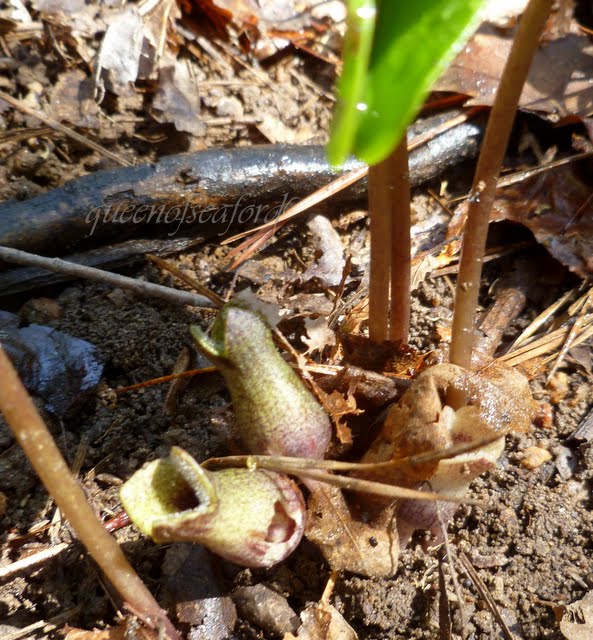 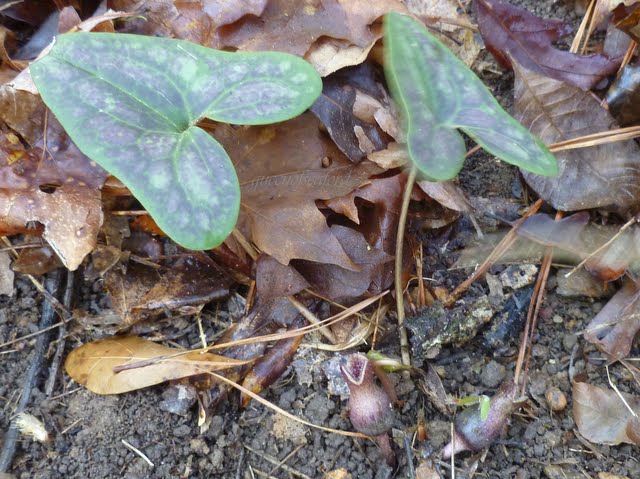 I wish there was a list of all the various plants we were able to see, being in the middle to back of the pack, I wasn't able to catch all the names.  Seems like I kept falling further back as I stopped to take some photos.  Will have to return next spring again.  With this warm spring and a little more rain, we were able to see a lot of spring ephemerals in bloom.  This is Hairy Spiderwort, Tradescantia hirsuticaulis, which blooms spring and fall.  The small hairs on the filaments are most interesting.  According to Patrick, this plant is sensitive to radiation in the soil.   This one was found in the first part of the trail.  Remember this as we get down closer to the Savannah River area. 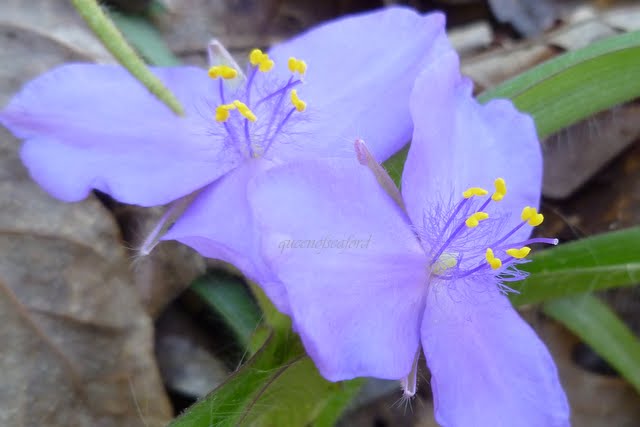 Native Geranium were scattered in the open areas. 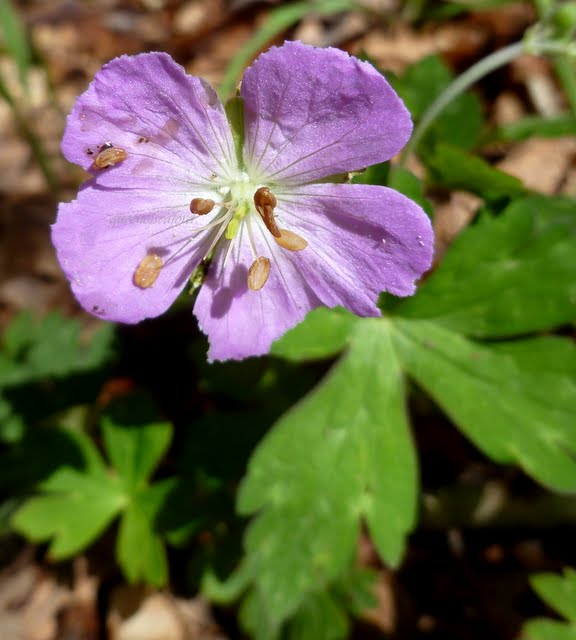 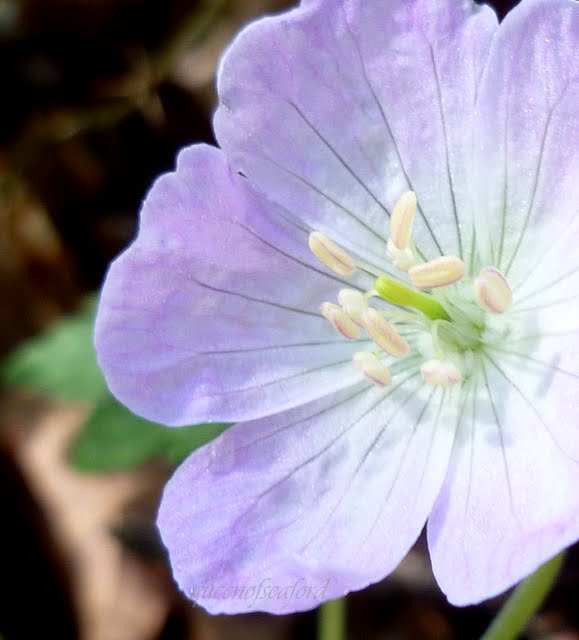 When we first encountered this little beauty I thought it was Blue-Eyed Grass from a distance.  As I got closer I saw the beautiful coloration on its petals.  While I have seen this on many other blogs, I was not prepared to know it for its small size.  This is Spring Beauty, Claytonia virginica. 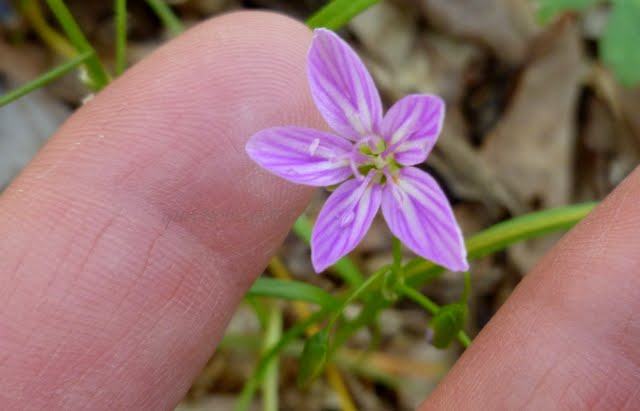 Nestled along with the Claytonia and Geranium, was this False Rue Anemone, Enemion biternatum 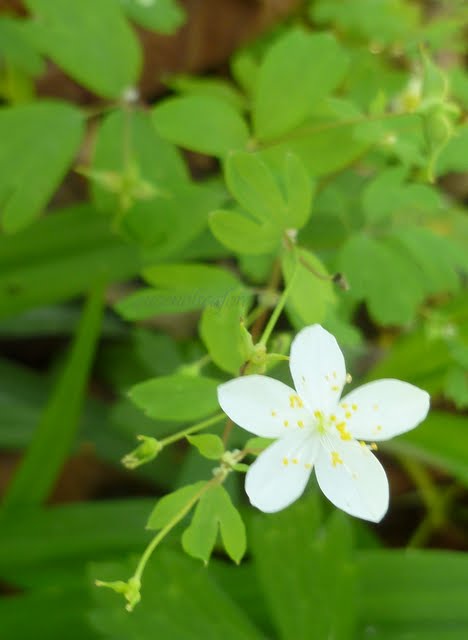 Many Trillium were in bloom, again, being in the back of the pack, I am not sure of the species.   What interesting blooms! 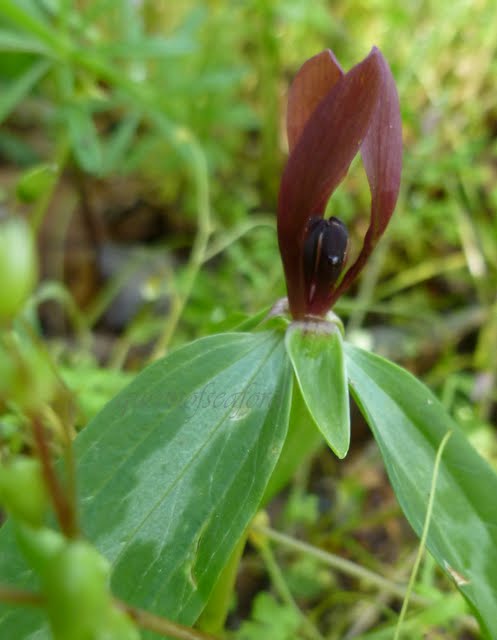 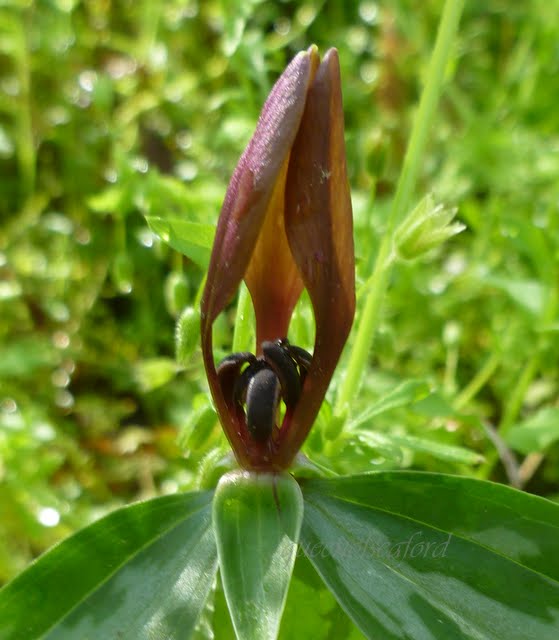 There is one plant that is not found anywhere but here and Lake Miccosukee, Florida.  It is the Miccosukee Gooseberry, Ribes echinellum.  Two places on this earth!! Amazing.   The leaves are lobed, hairy and the stems are quite thorny (as are most Gooseberry) 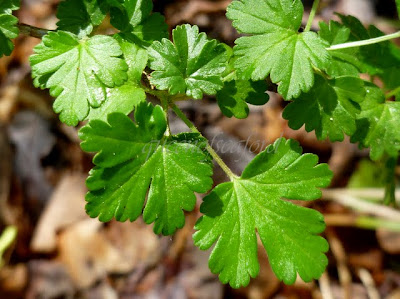 It appears that each node there are three thorns, pointing in three different directions. 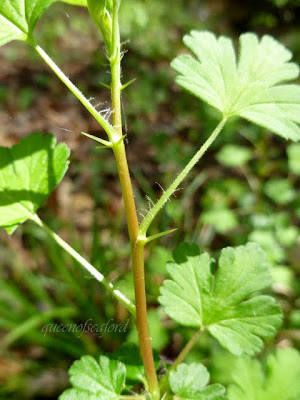 The berries form after the flowers are spent, hanging under the foliage. 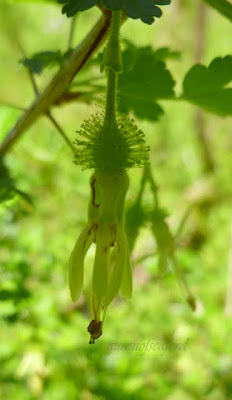 They are described as little ballerinas twirling. 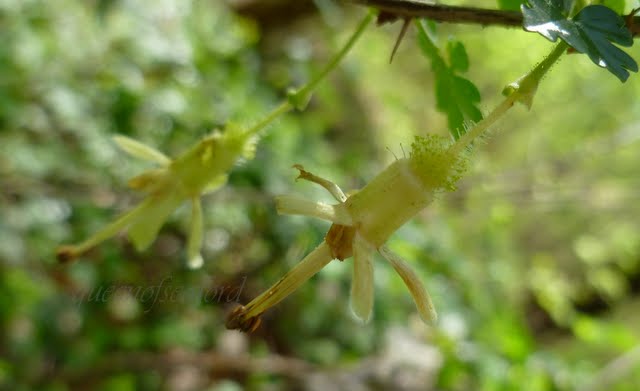 Down along the pathway, where the moisture is more abundant, are some Solomon's Seal.  Polygonatum biflorum  The flowers aren't quite open yet. 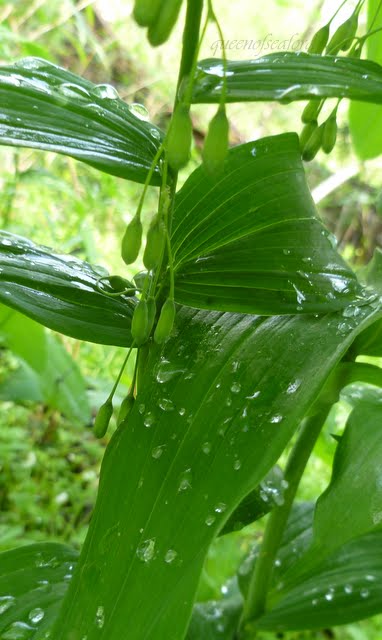 Native shrubs, like the Spicebush, Lindera benzoin, pictured below were in the open area.  There was a grove of Pawpaw, Asimina triloba.  Interesting facts about the Pawpaw-- they need another plant to reproduce.  Most Pawpaw form groves, clones of the parent plant.  They will not produce fruit if there isn't a different parent plant. 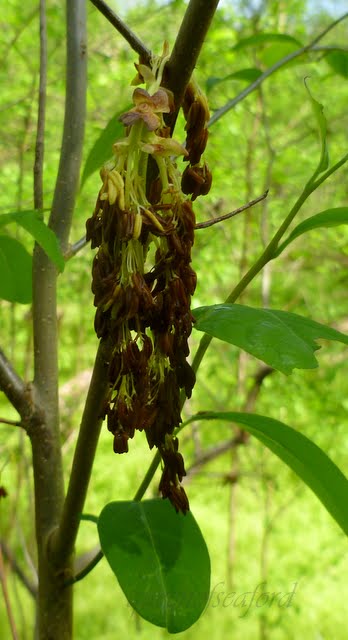 Ferns were coming up.  I love the curled heads as they emerge and unfurl.  There were Christmas ferns and Beech ferns along our path. 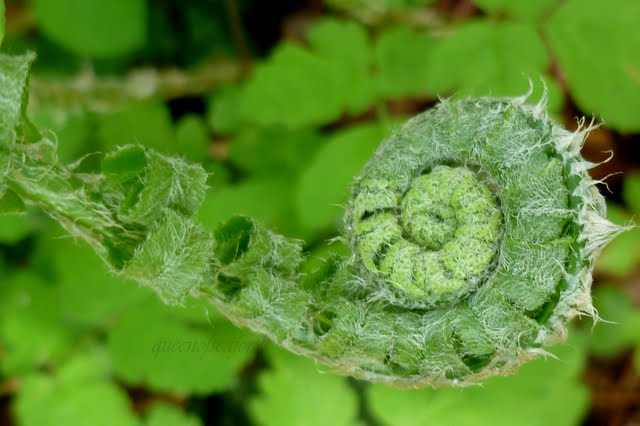 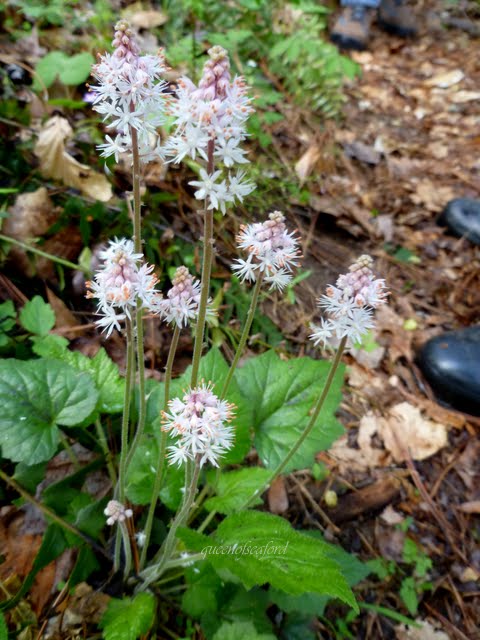 As we walk along the edges of the Preserve where we are closer to the Savannah River we come across some more Spiderwort--- remember those hairy fibers along the filament?  No longer purple, but a pinkish color.  Very interesting!! 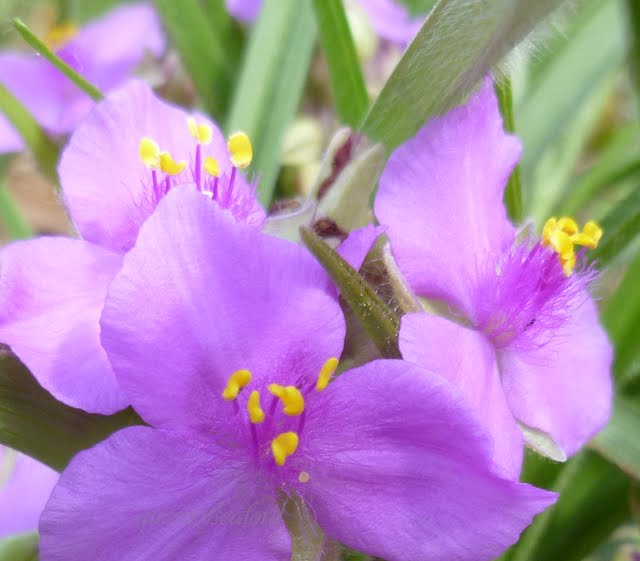 Last but not least, as we joined crossed a small creek and headed back, retracing our steps, was a cluster of  Shooting Star, Dodectheon meadia.
Pollination of this upside down bloom is quite the challenge! 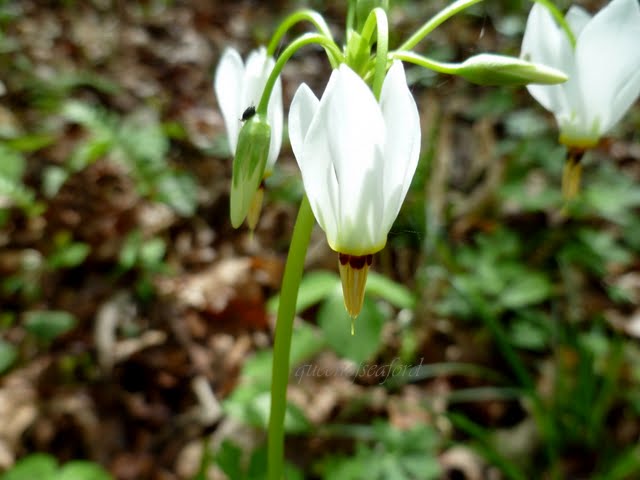 Additionally, this ties in well with Gail's Wildflower Wednesday at Clay and Limestone.  Head over and see more natives!