Busy Time in the Garden, Little Friends, New Plants and a Contest

This month's photo contest over at Gardening Gone Wild is once again about light.  They are looking for how the amount/direction/filter and other nuances of light affect the photo or creates the mood.  My submission is my Japanese maple 'Garnet'.  It seems to just glow. 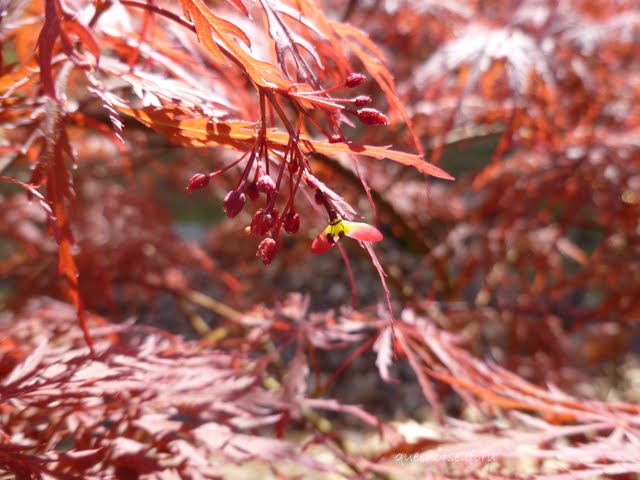 Keeping my fingers crossed for this month's attempt.

Now on to the rest of the garden.  We had been busy through March moving rocks.  When we first moved in the backyard garden looked like this after a rainfall. 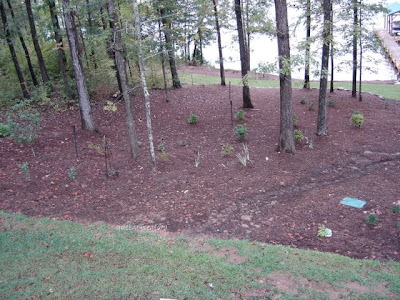 While this looks nice, you can't see the pathway except for the runoff of the rainwater downhill creating a rut in the center of the pathway.  Originally the garden beds were mulched with pinestraw and the pathway was hardwood mulch.  It created a nice definition without being too harsh.  The lower part of the garden is walled with some flat rocks and looks nice.  I think in the beginning our landscaper asked if we wanted the walls all the way around the garden.  I think I said no.  Isn't is nice a gal can change her mind?
I have some tender plants that would benefit from not being stepped on by dog or human.  Since we had a large load of rock leftover (sitting at the bottom of the hill) we decided that this would be a good winter project.  The load of stone was left on the flat part of the yard where the elevation is probably 445-450 feet above sea level.  Where we were starting to place the stones was about 465-470.  My friend Linda and I started the hauling of the rocks in one of my large garden wagons.  You know.....they get really heavy when you are going uphill, through the mulch.   We did four loads and felt like we had made headway....until we turned and looked down the hill.
After Linda left Charlie started bringing up the rocks in the wheelbarrow, I think about 20 or more loads, dumping them midpath.  My job was to place the rocks.  In some instances it was hard to find where the path was as the washout went straight and of course the path didn't. 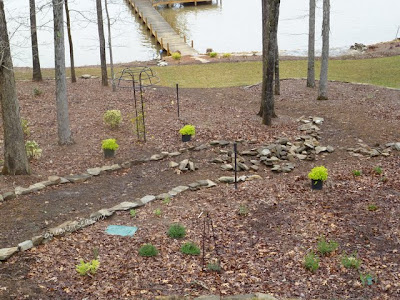 From above you can see the defined pathways once again.  I had about 10 more feet of rocks to place when I took this picture.  I carried the rest by hand (it was all on the flat part of the lower yard) to finish. 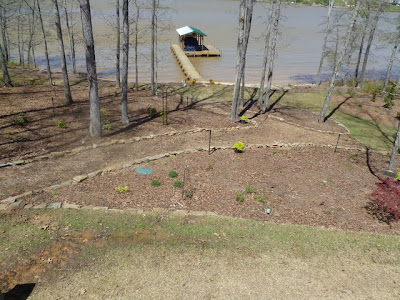 So from any angle it is a nicely laid out park setting, with pathways. 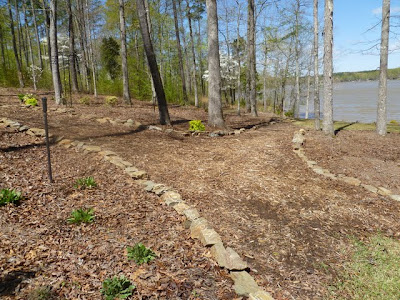 I am thinking about a bench at the intersection of the two paths. 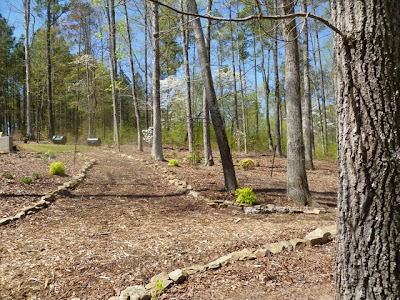 We all know with this garden I have lots of room to have many plants.  Last Saturday I was able to go up to to the SC Native Plant Society plant sale.  I had a list so as to not go completely crazy.  I came home with two Mountain Laurels, Kalmia latifolia 'Carol'  and 'Sarah' (or 'Carousel'-- it had two tags, either is fine), three native deciduous azaleas- Rhododendron canescens, R. arborescens, R. periclymenoides--all will find a place to become as large as they want.  I also bought a  Cephalanthus occidentalis, Buttonbush, a False indigo, Baptista, and a Silene virginica, 'Fire Pink'. 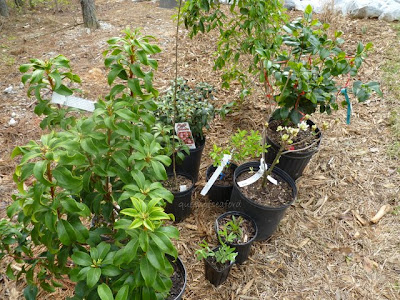 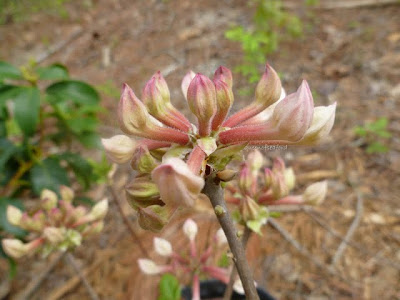 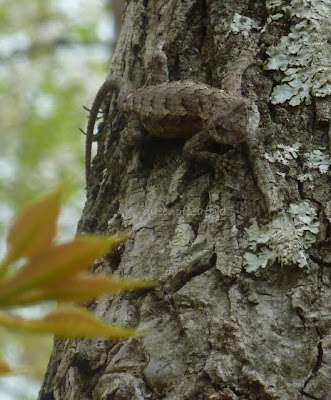 I have been walking around the yard and into the woods, checking out new growth, etc.  I didn't realize I was being watched.  We have lots of these little guys, various colors and sizes.  They are fun to see.
In the area where on of the Mountain Laurel will go is my Striped Wintergreen, Chimaphila maculata, who is getting ready to bloom. 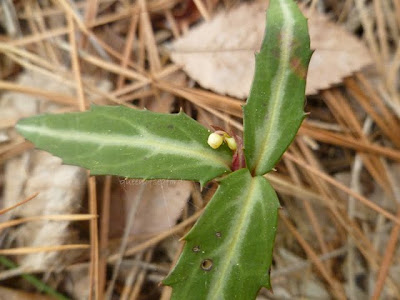 I also found an unknown coming up.....anyone have any ideas what this is?  The red stems caught my eye. After the woods I checked out the front garden, the Fringe tree, Chionanthus is blooming and so are the Narcissus 'White Marvel' planted around the base. 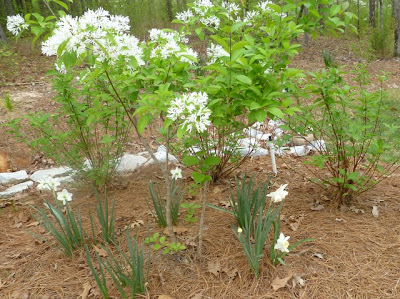 These blooms are so white. 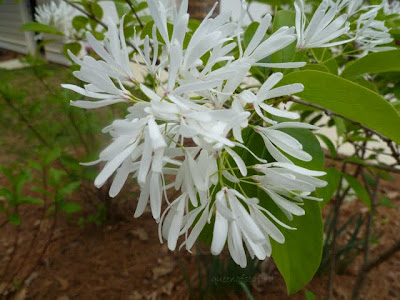 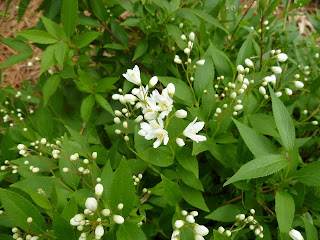 And sadly, the Pieris japonica 'Cavatine' is done for this year and starting to lose its blooms. 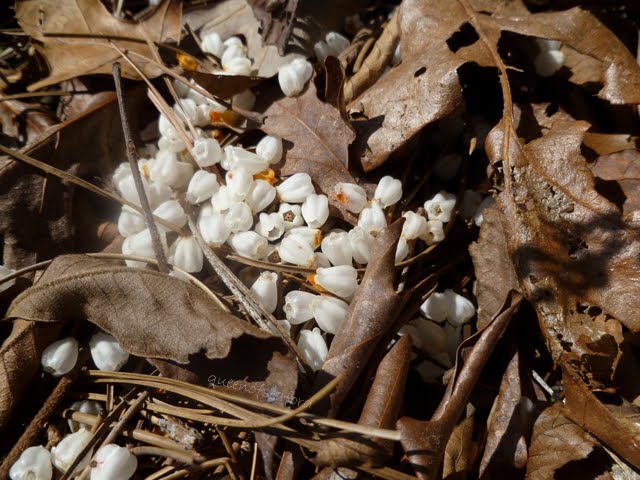 How is your garden shaping up?
©Copyright 2011 Janet. All rights reserved. Content created by Janet for The Queen of Seaford.